The opposition Democrat Party says it will back protests by the People's Alliance for Democracy against any reconciliation bill they see as aimed at whitewashing the crimes of ousted prime minister Thaksin Shinawatra. 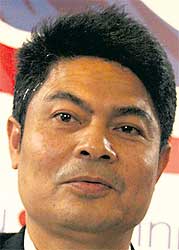 Three reconciliation bills were presented to the House yesterday, in addition to one presented earlier.

Democrat MPs who shared the belief that the charter bill should not go ahead had the constitutional right to express this, Mr Chalermchai said.

He said Democrat MPs would show their opposition to the bill both inside and outside the parliament building while his party would adhere to peaceful moves and the national interest.

Democrat MP Thepthai Senapong yesterday said many people would join the rally. He encouraged viewers of his TV programme to participate.

He called the rally the beginning of a second round of battle against the Thaksin regime.

The bill would provide Thaksin with an amnesty from the two-year jail sentence he was given in 2008 for abuse of power. PAD leader Chamlong Srimuang said the rally would start at 1pm at the Royal Plaza and proceed to parliament about 3pm.

"[The protest] is calling for the House to reject any reconciliation bill. If one is approved, it would ruin the country," he said yesterday.

Maj Gen Chamlong said the yellow shirts opposed the bill even though the PAD also stood to gain from it.

"We are looking out not for our personal interests, but the nation's interests," he said.

House Speaker Somsak Kiatsuranont said the bill is likely to be deliberated tomorrow.

Another PAD leader, Pibhop Dhongchai, said the alliance would protest against any matter involving the lese majeste law or moves to seek an amnesty for Thaksin.

"It is clear the draft legislation proposed to parliament is about Thaksin's amnesty and the return to him of his seized assets, even though the court has already ruled on the case," he said.

"The judgment of the Constitution Court must be respected by all parties including the House."

He said it violated Section 216 of the constitution, which states: "The decision of the Constitution Court shall be deemed final and binding on the National Assembly, Council of Ministers, Courts and other State organs."

Pol Col Jak Jittatham, deputy spokesman of the Royal Thai Police Office, said at least 700 police would be on duty at parliament to ensure order during the PAD rally.