Deposed prime minister Thaksin Shinawatra has apologised to his red shirt supporters for his earlier "incomplete message" telling them to set aside their anger and support national reconciliation. 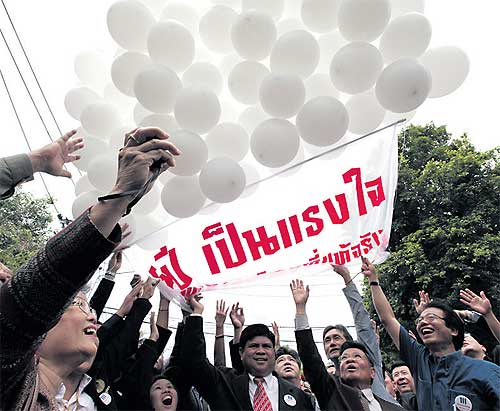 Former executives of the defunct Thai Rak Thai Party release balloons to mark the expiry of their five-year political ban yesterday. They later attended a meeting as many of them have announced they are returning to politics. APICHART JINAKUL

Thaksin, who has lived in self-imposed exile for four years, is worried the red shirts may misunderstand the message he gave to them during their gathering to mark the second anniversary of the military crackdown at Ratchaprasong intersection on May 19, 2010.

He made his apology via video link to mark the celebrations of the House No.111 politicians, the former Thai Rak Thai Party executives, whose five-year political ban ended yesterday.

"I might not have spoken clearly that day. The signal was very bad and was cut off. I could not concentrate and so I believe my message might have been incomplete," Thaksin said before about 50 banned politicians who joined the celebrations.

On May 19, Thaksin urged the red shirts to put aside their anger and feelings of injustice for the sake of national reconciliation.

He insisted he would never forget his red shirt supporters as he has actively pushed ahead for state rehabilitation and compensation for those who lost their loved ones.

However, he continued, it would be pointless if the current political conflicts drag on. Thailand needs to regain its peacefulness and must prepare itself for fierce global competition.

Thaksin closed his speech by encouraging the House No.111 politicians to let bygones be bygones and proceed down their political paths again.

"My brothers, today it's time for us to return to resume political roles and help drive the country forward," he said.

About 40 of the banned politicians will apply for membership of Pheu Thai, party spokesman Prompong Nopparit said earlier.

However, it is unclear whether some of them will be given ministerial posts in an expected cabinet reshuffle.

They also announced support for the government's reconciliation bill despite the protest by the anti-Thaksin People's Alliance for Democracy.

The bill would grant an amnesty to political offenders and invalidate the verdicts of the Constitution Court and the coup-appointed Assets Scrutiny Committee, which investigated graft allegations against the Thaksin government, said Mr Pokin, former interior minister.

The now-dissolved ASC's investigation led to the Supreme Court's ruling in 2008 to sentence Thaksin to two years in jail for abusing his power to help his ex-wife Khunying Potjaman na Pombejra buy state prime land in Ratchadaphisek. Thaksin then fled the country to live in self-exile abroad to avoid the prison term.

"Have you wondered how come Thaksin can travel to different countries, but not to Thailand? Does this mean that the justice system in Thailand is above the world's?" Mr Pokin said.

Mr Somsak, who heads the Bhumjaithai Party's Matchima faction, agreed with the bill as it would benefit many sides including the 111 former executives of the dissolved People Power, Chart Thai and Matchimathipataya parties, who are also barred from politics for five years after their parties were found guilty of poll fraud in 2008.

"I ask those who oppose the bill to try and take a step back," he said.