Poll: Most women admit to gambling

More than 60% of the women questioned in a recent Abac survey admitted to having placed bets on football, the pollster reported on Friday, just hours before the 2012 European football championship kicked off.

The Abac poll by the Business Research Centre at Assumption University was conducted in Bangkok and nearby provinces between June 2 and 6, and involved 1,000 women.

Pollsters said 62.5% of the respondents admitted they gambled even though they were aware it was illegal and could create social problems. Abac said 40.6% of those saying they gambled were under 20 years of age and 75% were not 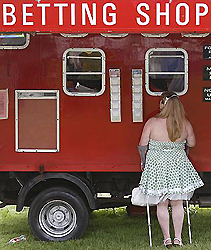 - 54% said they saw football gambling as a social norm in Thailand. About one-quarter of those polled said they had laid bets in the past 12 months.

- 75.5% said they knew friends or people who wagered on football, and 23.9% said their family members also gambled.

- 59.9% said they knew about the European Football Championship 2012, which is being played in Poland and Ukraine until July 1.

Jadet Chaowilai, director of the Women and Men Progressive Movement Foundation, said some women might fall victims to gambling during Euro 2012, and they might encounter debt and family problems.