Confrontation between the Constitution Court and the parliament was narrowly averted when the parliament backed down from challenging the court’s authority. New troubles are brewing for Pheu Thai Party leader Yongyuth Wichaidit and de facto leader Thaksin Shinawatra. And two innocent people shot dead and two others wounded as student gang violence rears its ugly head again. 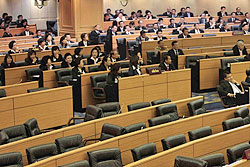 Political tension has eased, at least for now, after the parliament or, to be more specific, the Pheu Thai Party, backed down on its earlier hardline position to defy the Constitution Court’s injunction ordering parliament to delay the final reading of the constitution amendment bill.

The parliament failed to get more than half of the combined votes of the Senate and the House to defy the court’s injunction. Several MPs of the Pheu Thai and Chart Thai Pattana parties were conspicuously absent in the chamber when the vote was called during the joint sitting. Their absence angered many other Pheu Thai MPs who have demanded disciplinary action against the absentees. Parliament President and Pheu Thai list MP Somsak Kiatsuranont was also heavily criticised for his refusal to challenge the court’s injunction.

This criticism of the Chart Thai Pattana MPs impelled the party’s de facto leader Banharn Silpa-archa to call fugitive former prime minister Thaksin Shinawatra and offer an explanation. Banharn reportedly put the blame on the Pheu Thai whips, saying they had not notified Chart Thai Pattana MPs in advance of how they should vote.

The parliament's retreat also angered the red-shirt hardliners who want the parliament to defy the court and to ram through the final reading of the charter amendment bill. In order to appease their red-shirt followers, red-shirt co-leaders who are also Pheu Thai list MPs , Nattawut Saikuar and Korkaew Pikulthong, were forced to speak up against Somsak.

The charter amendment bill and the reconciliation bills are expected to be resubmitted for debate during the next parliamentary session beginning in August, by which time the Constitution Court will have already given a ruling whether the amendment bill is constitutional or not and whether writers of the bill have any intention to overthrow the constitutional monarchy.

This means that Thaksin’s hopes for an early return home will have to remain on hold for a while longer. However, the ex-premier is in another hot seat now, after the Office of the Attorney-General filed malfeasance charges with the Supreme Court’s Criminal Division for Holders of Political Positions against 27 people, including Thaksin and former president of state-owned Krung Thai Bank Viroj Nuangkhae, for extending 9.9 billion baht in loans to three affiliates of Krissadamahanakorn real estate firm, which was blacklisted as an NPL, a company with non-performing loans.

ViratAew-aksorn, acting president of Krissadornmahanakorn, responded that the company had nothing to do with the three firms which were given loans by KTB.

And more troubles for the Pheu Thai Party when its leader, Yongyuth Wichaidit, deputy prime minister and interior minister, was faulted for malfeasance in office by the National Counter Corruption Commission for his role in endorsing the scandalous land deal between Alpine real estate company and Wat Thammikaram in 2002.

Alpine real estate, which was owned by a member of the Thienthong clan, bought the 924 rai of land in Klong Luang district of Pathum Thani from Mahamakutwittayalai Foundation, which was acting on behalf of the temple, and transformed the land into a golf course and a resort despite the fact that the land was bequeathed to the temple by a philanthropist, Mrs Nuem Chamnarnchartsakda, back in 1969 and as such could not be sold or transferred.

Then deputy interior minister Sanoh Thienthong used his authority to reject the land donation citing a provision in the land law which specifies that donation of land of more than 50 rai requires approval from the interior minister. The land in question was later auctioned and was bought by Alpine real estate firm which eventually sold the land and all the properties on it to Khunying Potjaman na Pombejra, who was at the time Thaksin’s wife.

The NACC’s indictment means big trouble for Yongyuth and will likely cost him his cabinet seat. Speculation is rife of an early cabinet reshuffle because of Yongyuth’s problem.

The brouhaha over the blackout of the Euro 2012 football tournament for TrueVisions subscribers took a new twist, for the worse, when the Union of European Football Associations (Uefa) refused to allow True Visions to rebroadcast the games to its subscribers.

Uefa’s decision was announced by GMM Grammy, holder of the broadcasting rights in Thailand. This means that TrueVisions’ subscribers will miss all the games unless they buy set-top boxes from Grammy or switch to terrestrial antennas and watch them on the free-to-air channels.

The Consumer Protection Board then jumped into the fray. PM's Office Minister Worawat Auapinyakul, who overseas the agency, said the board would write to Uefa and ask it to allow the rebroadcasts as a special favour.

But TrueVisions’ unhappy customers felt that the attempt came a bit too late and the tournament would be over by the time Uefa answers the board’s letter.

While being accused by her critics of not doing her job in the parliament, Prime Minister Yingluck Shinawatra was busy heading north to observe the progress of flood prevention projects in the upstream area.

The prime minister appeared dissatisfied with some projects which lag behind schedule although most of the projects in the North were 60-70 per cent complete.

The government’s top water expert, Royol Jitdorn, said that by the end of this month it would be more accurately assessed whether there will be another big flood this year or not. 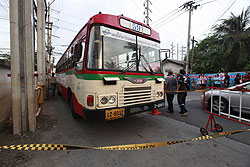 The most troublesome and tragic incident this week stems from the seemingly endless violent student brawls in Bangkok. The latest took place on Wednesday in Don Muang area and claimed the lives of two innocent people, a student at Thaivichitsilp art school and a 48-year-old woman.

The two victims were passengers in a packed No59 bus when it was attacked by a group of students, who fired gunshots at it. Two other bus passengers were also wounded in the indiscriminate attack.

After the incident, Thaivichitsilp school was closed down for the rest of the week to discourage any revenge attack. Police were still hunting for the killers, believed to be students from a rival school, with the help of footage from CCTV cameras installed in and around the area of the attack, and eyewitnesses.

Thailand should accelerate promotional campaigns targeting inbound visitors globally by the second quarter to offset the opportunity loss of 138 billion baht in the first three months, says the Tourism Authority of Thailand (TAT).

Digital Economy and Society (DES) Minister Buddhipongse Punnakanta says he will seek cabinet approval for 100-baht monthly assistance for two months for mobile subscribers of both prepaid and postpaid systems.

The Federation of Thai Industries (FTI) and state authorities are collaborating to support domestic manufacturing of refrigerators to hold Covid-19 vaccines at 2-8 degrees Celsius, building them at half the price of imported cold storage facilities.

57 local trains to be cancelled to curb virus spread