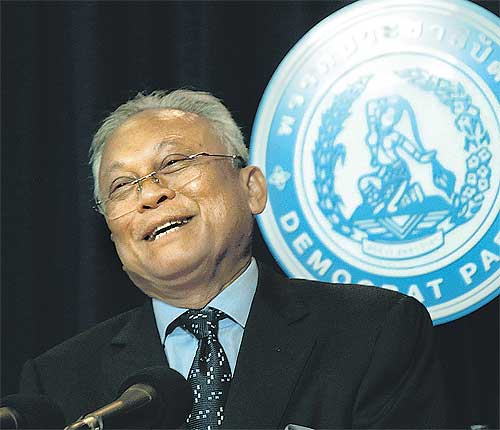 Mr Abhisit said Mr Suthep had kept him informed of Thaksin's actions and that he had reported them to Democrat core members.

"There was talk about setting up a two-party government. I informed core party members because I was concerned about [possible misunderstandings] that both parties were making a deal," Mr Suthep said.

Mr Suthep said last week that he was approached by Thaksin representatives to stop the campaign against the reconciliation and charter rewrite bills.

Mr Abhisit expressed confidence that Mr Suthep had not dreamed up the story to drive a wedge between Pheu Thai and the red shirts as claimed by Pheu Thai MPs.

He noted that Thaksin himself had clearly expressed his intent to return to politics and he would do anything to serve his own interests.

Mr Suthep yesterday said there was no need for him to disclose the names of the people who approached him for talks with Thaksin. "I think they should ask their boss. I don't want to drive a wedge. I think the people can judge for themselves who is more trustworthy, me or [red shirt leaders and Pheu Thai MPs] Jatuporn Prompan and Nattawut Saikuar," he said.

Mr Suthep reaffirmed that Thaksin sent "two upper-class ladies and a gentleman" to talk to him.

Mr Suthep said they first came to him around January or February. They made an offer for the Democrat Party to join a national government in exchange for not opposing the charter amendment bill and reconciliation bills which the government is pushing.

The women also invited him to go and see Thaksin in Dubai, but he refused. He was later approached by a well-known senior figure.

He also asserted that Prime Minister Yingluck Shinawatra and core Pheu Thai members were aware of the offer.

"If they don't want to speak the truth, they should keep quiet," he said.

Ms Yingluck yesterday denied any knowledge about her brother trying to approach the Democrat Party to join her administration.

She said it was highly unlikely that Thaksin would do such a thing and noted the Pheu Thai and the Democrat parties had different responsibilities.

"Pheu Thai is in charge of the country's administration. The Democrat Party is required to do its job [as the opposition]. I don't think it is possible," she said.

Mr Suthep said he decided to go public about Thaksin's offer because he did not want the Pheu Thai Party to distort the facts any further.

He said that the last straw was when Defence Minister ACM Sukumpol Suwanatat claimed the Democrat Party was isolated politically and that no one wanted to work with them.

He said he wanted to show that the Pheu Thai Party had been two-faced, as Thaksin had actually sent his aides to start talks with the party and seek their cooperation in pushing the bills.

Mr Suthep said the man who came calling on Thaksin's behalf also said the Democrats could select whatever ministries they would like to control in a two-party government, without any conditions.

He said the person was not Watana Muangsook.

Pheu Thai spokesman Prompong Nopparit yesterday called on Mr Suthep to disclose the names of the go-between or face a defamation suit.

"He must identify those people or he is nothing but a liar," said Mr Prompong.

He said the party would collect information and file a defamation suit against Mr Suthep.

He also insisted Mr Suthep and Mr Abhisit wanted to drive a wedge between the Pheu Thai and the red shirts.

Pongsak Raktapongpaisal, a close aide of Thaksin, yesterday denied that he was the middleman between Thaksin and the Democrat MP.

"I never acted as a coordinator. I just finished serving a five-year political ban," he said.

He noted that the first step in the reconciliation process should be a joint effort in parliament to amend the 2007 charter, which was the product of the 2006 coup that ousted Thaksin.

Writing on his Facebook page, he said Thaksin had seen the newspaper headlines and wanted to clear the air.

"My father wants me to pass on a message to the newspapers. It should read 'Thaksin: Suthep, dream on'," Mr Panthongtae wrote on his Facebook page.