The cancellation of the US space agency's climate research project at U-tapao naval airbase means the loss of a lot of potential benefits for Thailand, army commander-in chief Gen Prayuth Chan-ocha said on Friday.

"We'll have to see whether they [Nasa] will come back next year," Gen Prayuth said. "If we are prepared in advance, no problems would arise like this time."

The US National Aeronautics and Space Administration (Nasa) announced early Thursday morning Bangkok time that it had called off the SEAC4RS mission, scheduled to start next month, because of "the absence of necessary approvals by regional authorities in the timeframe necessary to support the mission's planned deployment and scientific observation window." 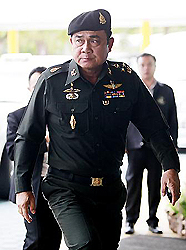 The army chief said the security sector has no dispute with anyone, including the Pheu Thai-led government.

He said the cancellation of the project will not affect ties between the Thai army and the US military.

"I believe everyone has good intentions for the country,'" he told reporters.

"When I met the prime minister [Yingluck Shinawatra], cabinet ministers and army commanders, they all agreed that if the project was beneficial to the country it should be tabled in the cabinet and a deal with the US would then be made.

"But the deal was not struck because of a lack of understanding, which resulted in the loss of potential benefits for the country, and I don't know who is to blame," Gen Prayuth said.

He said some people had gone out of their way not to understand why Nasa wanted to base its regional atmospheric research project in Thailand, and this had made it difficult for officials to perform their duties.

"I have no conflict with anyone. I work within the facts and legal procedures. People can support or oppose the project, but don't get the army involved in this dispute," he said.

Meanwhile Chulalongkorn University security analyst Thitinan Pongsudhirak has told a seminar on Thai-US relations that he had recently talked with a senior US official who told him that President Barack Obama had cancelled a plan to visit Thailand because of the aborted research mission.

"The US is also now considering reducing diplomatic ties with Thailand because we declined to work with Nasa and Thai politics got in the way.

"Can we now settle the conflict, talk to each other and take the country's best interests into account?"