A referendum must be held first for the public to decide whether the constitution should be amended, a witness testifying against the government-sponsored charter amendment bill said Thursday. 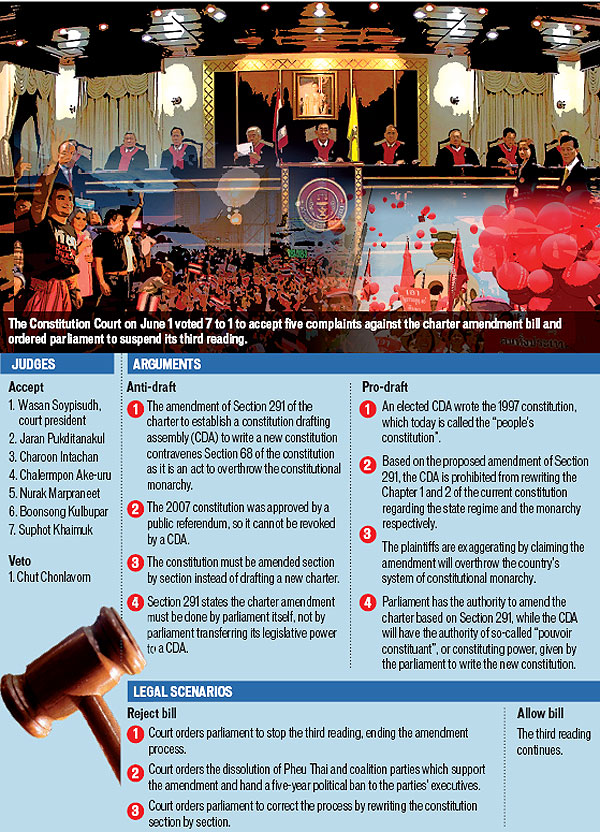 Surapol Nitikraipoj, a law lecturer at Thammasat University, told the Constitution Court that the current constitution is the only charter that has been endorsed by a referendum.

Testifying on behalf of the complainants, he said the current constitution is important as the first direct exercise of power by the people and therefore it has a special status different from previous charters.

The court on Wednesday approved 15 witnesses _ seven for the plaintiffs and eight for the defence _ to testify at hearings Thursday and Friday. After the hearings, it will decide whether the bill to amend Section 291 of the constitution contravenes Section 68 of the charter. The court will hear from the defence team today.

Mr Surapol said the current charter can be amended, but any changes must start with the same process as when it was approved by a referendum and became law in 2007.

This means a referendum must be held to allow the public to decide if they agree with the government's move to rewrite the charter.

But as it happens, the government has now drawn up a charter amendment bill and tried to push for its passage before seeking public opinion, Mr Surapol said. The government failed to ask the public first whether it was proper to change the charter.

"Section 291 does not allow for drafting a whole new charter. It only allows certain sections of the charter to be changed. Those who hold the people's mandate have no authority to abolish the charter. If you want to do away with it, you must go back to the power which established this constitution," Mr Surapol said.

Meanwhile, Judge Jaran Pukditanakul recused himself from the hearing.

Court president Wasan Soypisudh said Mr Jaran felt uncomfortable about hearing the case after a lawyer for the defence said during testimony in the morning that Mr Jaran had previously urged people to vote for the 2007 constitution because it could be changed later on.

Chusak Sirinil, a lawyer representing the Pheu Thai Party, said Mr Jaran had once told the media that the 2007 constitution should be endorsed first and that it could be amended later.

This prompted Mr Jaran to explain that he was merely expressing his opinion because he had wanted the country to free itself from the dominance of the coup-makers at the time. Mr Jaran said that only certain sections of the constitution can be amended, not the whole charter.

Mr Jaran during the afternoon session recused himself from the panel of judges.

The Constitution Court president said the hearing of witness testimony could continue because the remaining eight judges still constituted a quorum. The law requires that at least five judges hear the case.

Mr Chusak said that the complainants just took it for granted that the establishment of a constitution drafting assembly would lead to upheaval in the government.

Mr Chusak said that in the past, constitution drafting assemblies had also been created to amend constitutions and this could be regarded as a traditional practice.

On June 1, the Constitution Court ordered parliament to suspend the third reading of the legislation after accepting petitions arguing the charter change bill may constitute an attempt to overthrow the constitutional monarchy.

In the morning session of the hearing, Constitution Court judge Nurak Mapraneet explained that the panel of judges will examine four issues _ whether the court has authority to accept the petitions against the charter bill under Section 68 of the constitution; whether a whole new charter can be written under Section 291; whether the bill to amend Section 291 constitutes an attempt to overthrow the constitutional monarchy or to acquire power to rule the country by unconstitutional means; and whether political parties involved in the charter rewrite bid would be dissolved if the other three issues are proven true.