Consumer activists have called on the Agriculture and Cooperative Ministry to ban the use and registration of four farm chemicals after residues of two cancer-causing pesticides were found on several vegetables sold in the market. 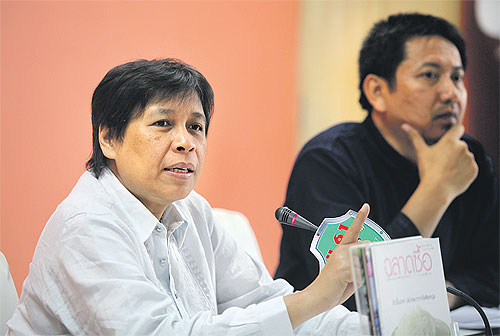 Foundation for Consumers manager Saree Ongsomwang yesterday said laboratory tests had found residues of carbofuran and methomyl on several vegetables that are popular in home cooking.

The vegetables were taken from the shelves of large supermarkets in Bangkok.

The tests showed the vegetables supplied to or marketed by the stores were contaminated with farm chemicals exceeding the safety standard.

Withoon Liemchamroom, director of BioThai Foundation, said a leading chemical firm was behind a recent move by a group of mango growers to push for the registration of methomyl.

He called on the Department of Agriculture under the Agriculture and Cooperatives Ministry to reject the group's request to register the four toxic farm chemicals _ methomyl, carbofuran, dicrotophos and EPN _ to protect farmers and consumers from cancer-causing substances.

The Thai Mango Growers Association last week called on the ministry to register methomyl, which repels pests that threaten mango yields and exports.

Some countries that are markets for mangoes permit the use of methomyl on the fruit in reasonable amounts.

The Dangerous Substances Act, which took effect in August last year, requires all pesticides to be registered before they can be sold. Methomyl has not been registered, although many farmers still spray the pesticide on their orchards.

Mr Withoon dismissed claims the export market for mangoes would be affected if methomyl was not registered.