LUOYANG, CHINA: Vatana Assavahame made his first public appearance at a Buddhist temple he commissioned in China on Friday after fleeing a jail term for bribery four years ago. 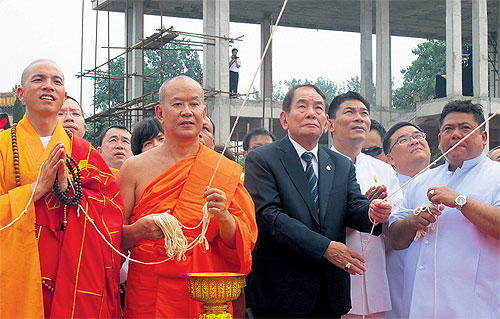 Vatana, a former deputy interior minister and ex-chief adviser to the Puea Pandin Party, showed up at a Friday ceremony to bury a sacred luk nimit stone orb in the grounds of Wat Hame Assavaram, the first Thai Buddhist temple of the Thevarada doctrine to be built in China.

The fugitive politician spent 200 million baht of his own money to build the the temple located in the compound of Baima Si, an old Chinese temple in Luoyang in the central Chinese province of Henan. The temple took almost two years to build.

Nearly 100 Buddhist monks from Thailand and more than 500 high-profile Thai and Chinese guests attended the ceremony, organised by Vatana.

Vatana said he visited the Baima Si temple when he was deputy interior minister in 1990 and had a small temple structure built there.

It was not until two years ago that he revisited the temple and decided, with the Baima Si temple's permission, to commission Wat Hame Assavaram on the site.

The temple was designed to reflect Thai arts, he said.

Highly-revered Somdej Kiew, or Somdej Phraputhajarn, abbot of Wat Srakesa in Bangkok, has sent senior monks to follow up on the construction of the temple, he said.

Vatana fled Thailand after he was sentenced in 2008 by the Supreme Court's Criminal Division for Holders of Political Positions to 10 years imprisonment for bribing officials in connection with a land grab in the Klong Dan waste water treatment project in Samut Prakan.

Since fleeing the country, he has reportedly spent time in Cambodia, Hong Kong, New Zealand and China.