After three years in exile, Vatana Asavahame believes national reconciliation will be tough to achieve and peace will not be restored if politicians still play politics in a way that they must win at all costs. 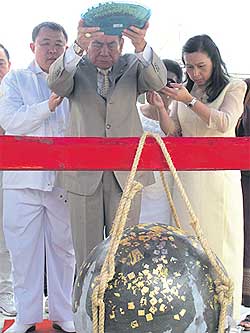 Vatana Asavahame sprinkles petals over a holy luk nimit orb during his recent visit to a Thai temple he commissioned in Luoyang, China. NAUVARAT SUKSAMRAN

"As long as they [politicians] still play politics in such a way, national reconciliation will not have a chance. They don't care for the country," the fugitive politician said in China.

Vatana, a former deputy interior minister and ex-chief adviser to the Puea Pandin Party, made a rare public appearance after fleeing a jail term for bribery four years ago.

He said efforts by politicians to forge reconciliation were cosmetic. The conflicting parties showed no sincerity and were not speaking the truth.

He declined to comment on whether Matubhum Party leader Sonthi Boonyaratglin had sought his advice over the controversial reconciliation bill he sponsored.

He said Gen Sonthi, who led the 2006 coup that toppled the Thaksin Shinawatra government, had used a parliamentary channel to push for reconciliation, only to run into fierce opposition for allegedly trying to help Thaksin, also a fugitive, return a free man.

He nodded his head when asked whether he had met Thaksin after both of them fled the country to live in exile.

"I have not given my phone number to anyone. I've kept a low profile abroad. I sometimes talk to my friends," said the former Samut Prakan politician.

Vatana was sentenced in 2008 by the Supreme Court's Criminal Division for Holders of Political Positions to 10 years in jail for bribing officials over a land grab in the Klong Dan wastewater treatment project in Samut Prakan. He fled abroad before the verdict was read out.

The 80-year-old politician, who looked healthy and strong, recounted the day he left the country.

"On that day, I prepared to go to the court to hear the verdict as I was confident I would be acquitted. I had fought the court battle and prepared evidence to clear my name. I originally had no intention to flee," said Vatana.

He initially spent his exile in Cambodia before travelling to visit his friends in China, Australia, New Zealand, Singapore and Hong Kong, he said.

The fugitive politician made his first public appearance at a Buddhist temple he commissioned in China last Friday. Wat Hame Assavaram is located in Luoyang in the central Chinese province of Henan.

He admitted life on the run left him stressed in the first few weeks.

"At the time, I hardly slept. This happened for months. I felt stressed and wanted to return home every day, every hour and every minute. I felt lonely. I chain-smoked five packs of cigarettes a day," said the former deputy interior minister.

Although he has finally adjusted to his life abroad, he yearns to return to Thailand.

Vatana, however, insisted he did not hope to gain anything from amnesty legislation that might be pursued by politicians in the future.

Woman who spat on others tests negative

NAKHON RATCHASIMA: A feverish passenger who spat on rescue workers trying to offer her a face mask on a local train has tested negative for the coronavirus, to the relief of the staff on duty and passengers in the same carriage.

PHUKET: Eight people — five Thais, two Myanmar men and one Chinese — have been arrested in Patong area of Phuket for breaching the curfew, which began on Friday night to prevent the spread of the coronavirus disease.

WASHINGTON: The US government has begun advising people to wear masks if they go outside, pointing to research that shows the coronavirus could be spread just by breathing.