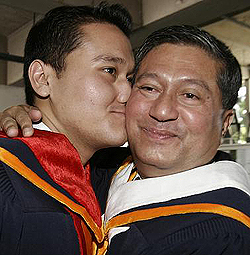 Chalerm and Duang Yubamrung embrace at 2006 ceremony at which Duang received a doctorate in law from Ramkhamhaeng University. (Photo by Somchai Poomlard)

The Royal Thai Police Office on Friday approved a request from the Defence Ministry to transfer the son of the veteran politician. The approval was signed by Metropolitan Police Bureau chief Khamronwit Thoopkrachang.

Lt Duang said his transfer had nothing to do with his father.

"I studied law so I think that I would be more suited for police work and also be more useful," said the deputy premier's son.

"I don't want to be a politician because I've been around politics since I was a kid. It's chaotic and I don't like it and I don't know how the current political situation will end," Lt Duang said.

Mr Chalerm said his son had never told him about the transfer. He said they rarely saw each other because his son was not home very much.

"This is not nepotism but he [Duang] is a sharp shooter," said Mr Chalerm.

"Duang shoots very well and has 16 certificates. His shooting accuracy is 100 percent while mine is only 98 percent and there aren't many people in Thailand who have perfect shooting accuracy."

Duang Yubamrung was discharged from the army in 2002 for desertion after he fled to Malaysia in 2001 after being accused of shooting dead a decorated, on-duty police officer in a Thong Lor nightclub.

He surrendered the following year and was later acquitted of murder by the Criminal Court on the grounds of insufficient evidence and conflicting witness accounts.

In April 2008, then-prime minister Samak Sundaravej, who was serving concurrently as defence minister, approved Mr Duang's application to rejoin the military. His reinstatement was reportedly pushed through by Mr Chalerm. 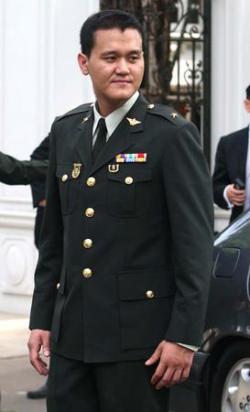