The media is partly to blame for the problems in the far South because they give the violence too much news coverage, and there are also evil politicians behind the insurgency, Deputy Prime Minister Chalerm Yubamrung said during the House meeting on Thursday.

Democrat MP for Narathiwat Surachet Wae-asae told the House that southern unrest had intensified since the first Thaksin Shinawatra administration. The government had not tackled the problem properly and there were human rights abuses in the region.

"Government officials don't give importance to the southern issue and they refuse to visit the area to assess the situation and raise the morale of the officers working there.

"Does this government know who the insurgents are, and how many there are? Why does the government have  to wait for information from the army and police only?" the opposition MP said. 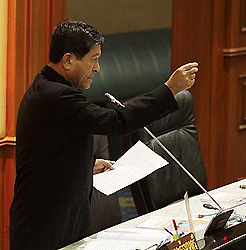 Mr Chalerm, who has been assigned by Prime Minister Yingluck Shinawatra to help oversee the situation in the far South, said government officials do not travel to the far South because funds and weapons were what the security officers there already need the most.

"If we have to go there, up to 700 security officers will have to be deployed and they have to prepare for three days in advance to clear the area and cut off cell phone signals," he said. "We don't want to cause trouble for people."

"We have the names of suspected insurgents from the army and we know who they are, but it's confidential. About 40 of them have already surrendered to the authorities.

"At present, we understand there are approximately 9,400 militants. About 2,600 are key insurgent members and militants and about 6,700 others are reinforcements," Mr Chalerm said.

If there is unrest in the Northeast, Pheu Thai MPs could look into the situation immediately, but the southern region is a Democrat Party stronghold and they were free to attend a security meeting on this Friday, Aug 10, to share information they have and ways to solve the problem directly with police, he said.

"Part of the problem is the media's excessive news coverage [about southern unrest]. There's no need to publish video clips of security officers being slain by insurgents," Mr Chalerm said.

He said there were also some "evil" politicians who sold contraband fuel and opened casinos along the Thai-Malaysian border. Some of them were involved in the drug trade and the army was aware of it, and reported it to the government.

Air force chief Itthiporn Supawong said on Thursday the air force is set to deploy a special task force to the far South to support the military's anti-insurgency operations on the ground.

ACM Itthiporn said the unit would use Au-23 Peacemakers, a single-engined highwing plane, for aerial surveillance and C-130s for transportation and military deployments in the area. 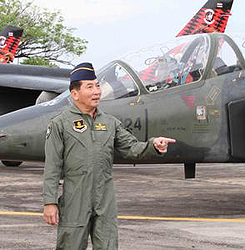 The air force will also deploy a twin engined DA-42 to support the surveillance missions. It is a more advanced aircraft and equipped with real-time cameras. Its surveillance systems could operate during the day and at night and it is suited for reconnaissance over forests, he siad.

The air force chief said he had discussed the matter with Defence Minister Sukumpol Suwanatat.

The unit had been trained to co-ordinate with ground forces and was ready to deploy as soon the ministry gives the green light, ACM Itthiporn said.

In the deep South today, three people were murdered in Songkhla and a bomb went off at a school in Narathiwat.

In the first incident, a group of men opened fire with AK47 assault rifles at a car on the outbound Hat Yai - Phatthalung road in tambon Tha Chang of Bang Klam district, killing Chaiwat Thongsakul, 38, and his wife Kanyarat Deesakul, 38, of tambon Ban Phru of Songkhla's Hat Yai district.

Police were investigating the motive for the killing, which was believed to be related to the trade in drugs.

The other shooting occurred on Lopburi Rames road in tambon Kho Hong of Hat Yai district. A group of men opened fire with an M16 rife at a white Toyota Vios, killing Somnuek Kimseng, 45, the owner of a karaoke bar.

Somnuek was hit four times, in the head and body.

A woman aged about 20, who was also in the car, was not hit but was hurt by the impact of the car ramming into a tree on the road median strip.  She was rushed to Hat Yai Hospital.

In Narathiwat's Sungai Padi district, a five-kilogramme bomb went off at a school, but inflicted no casualties.

The bomb, stuffed in a milk can, was discovered by students of Kawa School in tambon Kawa beneath a marble table partly concealed by chairs. They informed school director Somchit Thongchinda about the suspicious object.

As members of the bomb squad were moving closer to the object, militants hiding nearby detonated the bomb with a mobile phone.

The explosion damaged the marble table and chairs, but caused no injuries.

Police believed it was targeting soldiers of Rangers Company 4809, who regularly sit at the table while providing security for the school's teachers and students.

The school was ordered closed for one day.

Last month, 85 violent incidents were recorded in the far South, leaving 42 people dead and 96 others injured, according to Deep South Watch, an independent organisation monitoring the conflict.

More than 5,000 people have been killed and over 9,000 hurt in more than 11,000 incidents, or about 3.5 a day, in the three southernmost provinces and the four districts of Songkhla since the violence erupted afresh in January 2004, according to Deep South Watch.