National Artist Angkarn Kalayanapong has died after a long struggle with heart disease and chronic diabetes. He was 86. 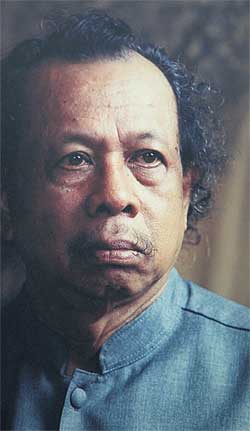 His death was announced early yesterday at Samitivej Hospital where the renowned poet and painter passed away peacefully.

Angkarn was born to kamnan Khem and Khum Kalayanapong on Feb 13, 1926 in the southern province of Nakhon Si Thammarat.

He began writing poems while in secondary school.

But it wasn't until he began studying at Silpakorn University that his natural flair for poetry began to shine and he had his works published in a campus publication.

Angkarn studied painting at the university, earning top marks while learning from such prominent artists as Italian-born Silpa Bhirasri.

However, it was his literature that made him nationally famous both among members of the public and academics.

His work is considered a model of Thai modern poetry because his thoughts and language are not restricted by traditional poetic patterns. This style was initially criticised for veering from poetic conventions and his use of raw language.

Angkarn was named a National Artist in 1989 for literature and won the SEA Write Award for Panithan Kawee (The Poet's Pledge) in 1986.

In addition to being a celebrated wordsmith, Angkarn's paintings are also well known.

He created several celebrated drawings and paintings during his career, including Prints Of Himmapan.

Throughout his life, Angkarn worked across different artistic genres, no matter whether they were paintings _ which he said provided him with spiritual fulfilment _ poems and sculptures.

He pledged that he would continue his work "until my next life".

Angkarn leaves behind a wife, Unruean, one son and two daughters.

His funeral ceremony will be held for seven days after a bathing rite which was organised at Wat Tri Thossathep yesterday evening.