Even if murder charges are laid against Democrat executives, the party will not back down and support the government's bid for a blanket amnesty to help ousted premier Thaksin Shinawatra, its MP for Surat Thani Suthep Thaugsuban says. 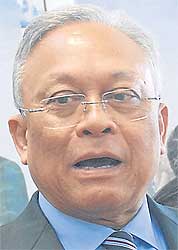 Suthep: Dares Tarit to charge him right away

Political observers say the government is using the threat of criminal charges against Democrat Party key figures as leverage to obtain a pardon for Thaksin.

Soldiers opened fire in a bid to stop a van that drove into a security area while Phan was walking nearby.

Mr Suthep was deputy prime minister and director of the Centre for the Resolution of the Emergency Situation (CRES), in charge of the red-shirt protest crackdown, and Mr Abhisit was prime minister at the time.

Mr Suthep challenged Mr Tarit to press charges against him right away.

"We never ordered the use of arms to deal with protesters but when armed 'men in black' appeared on April 10, 2010, and killed soldiers and innocent people, forces were allowed to use arms to protect themselves and people," he said, adding he would not use any charges against him to instigate political violence.

"The charges, if laid, will not scare me or Mr Abhisit and will not force the Democrats to support the amnesty push by the government," he said.

"They [red shirts] become dissatisfied whenever some people tell the truth. This was seen in the way they expressed disapproval of the Truth for Reconciliation Commission's [TRC] report."

Chaiyand Chaiyaporn, political science lecturer at Chulalongkorn University, said yesterday the DSI was "jumping the gun" in saying Mr Suthep and Mr Abhisit would be charged with premeditated murder. He said the DSI could be criticised for serving politicians in power if it prejudged the case against Mr Abhisit and Mr Suthep. However, he admitted the DSI would have to do its duty to find out those responsible for the killings following the court's ruling.

He called for the government to endorse the TRC report since the government permitted the committee, established by the Democrat-led government, to proceed with its investigation.

Mr Abhisit said yesterday that if the charges are pressed, Mr Tarit could not deny responsibility for the case because Mr Tarit had been a member of CRES.

But Deputy Prime Minister Chalerm Yubamrung said yesterday that Mr Tarit was not responsible for the deaths during the 2010 crackdowns as he had only been involved at an operational level.