The cancellation of the Channel 3 political soap opera "Nua Mek 2" for "inappropriate content" had nothing to do with the government, says a Pheu Thai Party deputy spokesman.

"The government did not intervene or order [Channel 3] to take Nua Mek 2 off the air," Jirayu Huangsap said on Saturday.

"But we should be aware that people will always associate any soap operas with a political storyline with the current government in any period of time."

He said it was not even certain whether the government was aware of the issue that led to the show's demise, and that many people in the government might not have watched the series anyway. 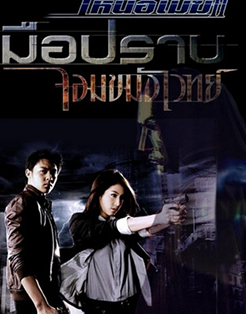 "There is no reason for the political side to pressure the media to stop this broadcast because a soap opera is just a soap opera."

Nua Mek 2 tells the story of a prime minister, his crooked deputy who is involved in a dubious satellite project, and a sorcerer who performs black rites to manipulate political events.

The series also featured a character called Prae-pailin and a special investigation unit called the TSI. The hook of the story was that the prime minister has already been dead and what we see is his body possessed by a necromancer.

Produced by Chatchai Plengpanich and directed by Nonzee Nimibutr, the programme made its debut on Dec 14. Originally 12 episodes were scheduled with the finale to be shown this Sunday.

After nine episodes, a decision was taken to combine the final three episodes into one, which was to be broadcast on Friday night.

However, at 6.30pm Friday, Channel 3 ran an on-screen message announcing that it wouldn't screen Nua Mek 2 and would replace it with the romantic drama Rang Prathana.

Online conspiracy theorists have been having a field day, with some noting that Nua Mek featured a government satellite contract. Deposed former prime minister Thaksin Shinawatra founded the satellite operator Thaicom before his family sold their shares in its parent Shin Corp in 2006.

Some commentators have suggested that Thaksin himself might have been offended by the show. The producers of "Nua Mek 2" have declined to comment on exactly what "inappropriate content" got them into trouble.

Sunisa Lertpakawat, another Pheu Thai deputy spokeswoman, said it was impossible for the "Man in Dubai", a reference to Thaksin's base in exile, to ask Channel 3 to abruptly end the show.

She said Channel 3 was a public company listed on the stock market and it had executives who made decisions in a professional manner.

The government cannot interfere with Channel 3's operation and there is no reason to do so, she added.

Chavanond Intarakomalyasut, a spokesman for the opposition Democrat Party, said he failed to understand why the content of Nua Mek 2 was deemed inappropriate since the drama focused on morality, ethics, goodness and the principle of doing good for the country.

"Although the government denies that it has nothing to do with this series' abrupt end, the Democrats believe Channel 3 and the show's producer have no reason not to air it just because it's political," Mr Chavanond said.

"Does the plot offend someone who works behind the government since the show and this government share similar elements?"

The video clip below, uploaded to YouTube by chailasalle, shows some scenes from the politically tinged Nua Mek 2 (Beyond the Clouds). In the first scene, a prime minister (wearing glasses) argues with his deputy about corruption in a government project.

Part of Poipet locked down amid Covid surge

Some areas in Poipet, some near the Thai border, have been closed by Cambodian authorities after a Covid-19 spike in the township.

JAKARTA: Indonesia's consumer confidence index rose to 101.5 in April, from 93.4 a month earlier, indicating optimism returning for the first time in a year as worries over the coronavirus pandemic eased, a central bank survey showed on Monday.

New police look in the works

Harnessing nature for the future