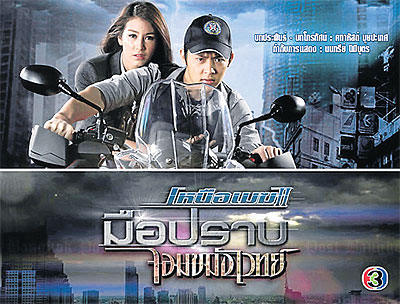 Fans were shocked when the heavily promoted Nua Mek 2 suddenly disappeared from the programme schedule on Friday night, a move which sparked a political melodrama.

The Thai Constitution Protection Association said it will petition the Central Administrative Court today to instruct the Consumers Protection Board (CPB) and the National Broadcasting and Telecommunications Commission (NBTC) to order privately owned Channel 3 to air the episode.

The activist said Channel 3 had violated consumers' rights and the constitution for its decision to abruptly cancel the political drama Nua Mek 2 on Friday night.

The station's action drew heavy criticism from many viewers who believed there might have been political interference.

Mr Srisuwan said he believed the content of the series did not breach any section of the Broadcast and Telecommunications Operations Act. Channel 3 claimed the content was inappropriate as it breached Section 37 of the act.

Nua Mek 2 tells the story of a prime minister, his crooked deputy who is involved in a dubious satellite project and a sorcerer who performs black magic rites to manipulate political events.

Mr Srisuwan alleged that Channel 3's action had infringed on the rights and freedom of consumers in violation of Section 45 of the constitution and Section 61 of the act.

The CPB and the NBTC must act to protect the rights of consumers, he said.

Unless the two independent agencies order Channel 3 to air the drama series within three days of it being pulled off the air - a deadline of Tuesday - they would face charges of being negligent in their duties, he warned.

Opposition Democrat Party leader Abhisit Vejjajiva said on Twitter that the abrupt cancellation of the soap opera was an infringement of civil liberties.

"I am not a drama viewer, but [the axing of the series] is tantamount to infringing on people's rights and liberties," Mr Abhisit said.

Actress Sinjai Plengpanich, who stars in the series, said she and her husband Chatchai, producer of Nua Mek 2, were not discouraged by the abrupt cancellation of the series.

Suriyasai Katasila, coordinator of the Green Politics Group, said he could not see how the content of Nua Mek 2 had violated Section 37 of the act.

He suspected the series might upset those in power as the final episode shows "a man in black", who used magic powers to help corrupt politicians, face punishment with his body dragged into hell.

RAYONG/AYUTTHAYA: Fisherman Anan Jaitang used to pile tattered nylon fishing nets on the beach after hauls of wriggling crabs tore them beyond repair, but most of the nets wound up in the sea, threatening to entangle turtles and choke coral reefs.

MOSCOW: The Kremlin on Thursday hailed as a "triumph" overwhelming backing in a national vote on constitutional reforms to extend President Vladimir Putin's rule.

The ex-boyfriend of late K-pop star Goo Hara was jailed by an appeal court Thursday for blackmailing her over sex videos that played a part in her apparent suicide.