The Supreme Administrative Court on Thursday ordered the Pollution Control Department to pay a total of 3.8 million baht compensation to 22 Karen villagers over lead contamination at Klity Creek in tambon Chalae of Thong Pha Phum district of Kanchanaburi province.

The verdict ended a nine-year legal battle between the department and the 22 Karen people who filed the lawsuit in 2004.

In the lawsuit, the Karen said the department, which is under the Natural Resources and Environment Ministry, was too slow to clean up Klity Creek after Lead Concentrate Co illegally discharged water highly contaminated with lead into the stream, causing them to suffer from the health hazards caused by the metal.

The company was forced to shut down in 1998.

The Administrative Court in May 2008 found the department guilty of negligence for being slow to clean up a  creek heavily contaminated with lead.

The Administrative court ordered the department to pay compensation of 33,783 baht to each Karen plaintiff, or a total of 743,226 baht.

Both the Karen and the department appealed to the Supreme Administrative Court. 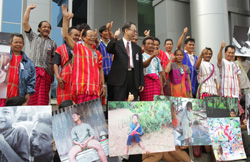 Karen villagers give themselves a thump up after the Pollution Control Department is ordered to compensate them over lead contamination in the Klity creek in Kanchanaburi province. (Photo by Tawatchai Kemkumnerd)

The Supreme Administrative Court on Thursday ruled that the department was too slow to restore the environment of  Klity Creek, thus depriving the 22 Karen of water for personal use and consumption.

The court also ordered the department to draw up a plan to restore Klity Creek and regularly test the water quality for a one year to make sure the lead content is lowered to the required level.

Surapong Kongchanthuek, director of the Centre for Study and Development of Karen, said he was satisfied with the court's verdict.

However, he said the court should lay down measures for the department to follow in order to restore the environmental conditions of the creek, instead of ordering it to draw up its own restoration plan.

Kamthon Srisuwanmaly, a 44-year-old Karen villager, welcomed the verdict, saying that it will put pressure on the department to urgently deal with the problem.

Surachai Trong-ngam, a lawyer working with  Environmental Litigation and Advocacy for the Needy, said a  special committee comprising academics, lawyers and the Klity Creek residents will be set up to closely monitor developments.

Pollution department chief Wichien Jungrungruang said he will ask the government for a special budget for the payments and will follow the court's order.

"Although we lost the case, we will continue to work and deal with the problem," Mr Wichien said.