After being grounded for about a decade, the only operational flying boat in the Thai navy has returned to the air, taking part in a maritime exercise which began on Wednesday.

The navy decided to bring its Canadair CL-215 twin-engined aircraft back into service after engineers confirmed its air worthiness. 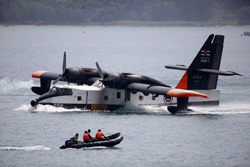 The CL-215 aircraft takes part in a maritime excercise which began on Wednesday. (Photo by Thanarak Khoonton)

The navy received two  of the planes from the manufacturer in 1978, but grounded both of them more than 10 years ago because of a lack of spare parts for maintenance.

With no budget to buy a new version of the CL-415, which has a current price tag of 10 billion baht, the navy decided to keep one plane flying and use the other for spare parts, navy chief ACM Surasak Rounroengrom said while observing the drill in the naval base in Sattahip district, Chon Buri.

The CL-215 aircraft is fitted out to take part in the two-month exercise as a search and rescue plane, he said.

It was greeted with big applause from assembled navy officers as it took to the air for the first time in years.