Arch-enemies reach deal to press on with amnesty
Thailand
Politics

Arch-enemies reach deal to press on with amnesty

Members of the red- and yellow-shirt political camps have reached an agreement to press ahead with a pair of political amnesty bills. 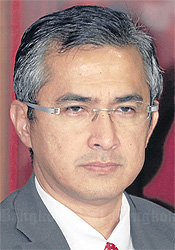 Korkaew: ‘Thaksin may be excluded’

The meeting was revealed yesterday by the two leaders of the rival colour-coded groups.

They reached an initial agreement to issue two amnesty bills.

The first bill involves the rank-and-file protesters who violated the emergency decree declared during the political protests five years ago, and the second bill would set up a committee to decide if anyone else should be granted amnesty.

Mr Parnthep said on his Facebook page yesterday that Mr Charoen asked him about his views on an amnesty bill proposed by the Independent Committee for Promotion of the Rule of Law, chaired by Ukrit Mongkolnavin.

The bill seeks to grant amnesty to protesters who took part in the political rallies from Sept 19, 2006 to May 10, 2011. Mr Parnthep said the bill also covers the PAD so he felt the need to clarify his position on the amnesty issue to avoid any conflict outside of parliament after the bill reaches the House.

He also consulted with PAD core leader Sondhi Limthongkul and PAD lawyer Suwat Apaipak before deciding to attend the meeting.

Mr Parnthep said he emphasised the PAD's stance that the rule of law must be upheld and those who broke the law must be punished. For those who were not guilty of crimes, there would be no need to grant them amnesty, he said.

He added that all stakeholders should get a voice in the amnesty, including the Democrat Party, the Pheu Thai Party and the wife of Gen Romklao Thuwatham - an army officer killed during the 2010 political violence.

Mr Parnthep said he agreed that the amnesty bill should follow the recommendations made by Mrs Nicha, Gen Romklao's wife. 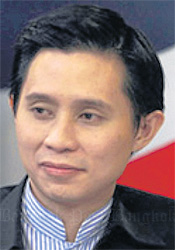 Parnthep: ‘Rule of law must stand’

Mr Parnthep said, however, Mr Korkaew proposed that the amnesty bill should cover additional groups of people. The meeting then agreed to propose two separate bills.

The first bill would follow Mrs Nicha's proposal and the second bill would scrutinise other candidates for amnesty.

However, Mr Parnthep said, he told the meeting that the PAD would not join any committee set up under the bill because the PAD does not want to be used as a tool to probe amnesty claims.

According to Mr Parnthep, Mr Charoen said he will invite representatives from the government and the opposition to discuss the possibility of drafting the two amnesty bills.

Everyone would be given a chance to review the bills if they are drafted, he said.

Mr Korkaew said the meeting was only to discuss the amnesty bill issue.

The proposals from the UDD are different from those of the Nitirat group, which call for a blanket amnesty, Mr Korkaew said.

The UDD has proposed that the amnesty cover two groups of political offenders. The first group would comprise the rank-and-file protesters who violated the emergency decree. The UDD says they should be granted amnesty straight away.

The other group would comprise others who would be scrutinised by a committee to figure out who among them were protest leaders or instigators.

"The outcome of the meeting has yet to represent [the opinions of] the entire group," Mr Korkaew said.

Mr Charoen said parliament could help both sides reach a resolution, adding that parliament would draft the bills to present to Pheu Thai and Democrat MPs for approval before resubmitting them to the House during this session.

He said he had now sought opinions from the PAD, UDD and the Democrats.

He said if all sides manage to find a common position on the issue, any parliamentary process that follows should be swift.