The Court of Appeal has acquitted a police officer accused of involvement in the disappearance of prominent Muslim human rights lawyer Somchai Neelaphaijit in 2004.

The court, in a ruling issued on Friday, said eyewitness accounts were inconclusive and there was no clear evidence to link Ngern Thongsuk to Somchai's disappearance.

Somchai, the chairman of the Thailand Muslim Lawyers Association, was 53 at the time of his disappearance. He was last seen in Bangkok.

He was well known for representing clients accused of insurgency-related violence in the far South.

In 2006, the Criminal Court convicted Ngern of assaulting Somchai and sentenced him to three years in jail. 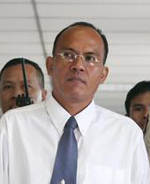 Pol Maj Ngern was released on bail and subsequently went missing. His relatives say he was swept away in a landslide and Friday's ruling was made in his absence.

Four other defendants were acquitted in 2006 owing to insufficient evidence -- a decision upheld by the appeal court.

"The witnesses were threatened. I was threatened," she told AFP, vowing to take the case to the Supreme Court.

"What do you expect from the witnesses' testimony when they were questioned in front of the police defendants and other police who were listening in the courtroom with them?"

New York-based Human Rights Watch has said it documented a pattern of enforced disappearances and other abuses by Thailand's security forces.

KYIV, Ukraine: Ukrainian Presidential aide Mykhaylo Podolyak on Monday called the International Olympic Committee (IOC) a "promoter of war" after the sports body said it was considering ways for Russian athletes to compete.