Former senator Jon Ungphakorn and nine other activists have been sentenced to suspended prison terms for trespassing on the grounds of parliament during a protest in 2007. 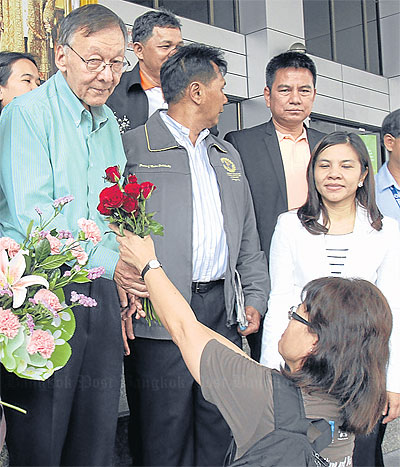 Former senator Jon Ungphakorn receives flowers from a supporter as he and nine other activists, including National Broadcasting and Telecommunications commissioner SupinyaKlangnarong, right,emergefromthe Criminal Court after hearing the verdicton the case involving their protest at parliament in 2007. Jonwassentenced to one year and four monthsin prison.The jail termwas suspended for two years. TAWATCHAI KEMGUMNERD

Jon, then chairman of the NGO Coordinating Committee, and nine activists, including National Broadcasting and Telecommunications commissioner Supinya Klangnarong and Foundation for Consumers secretary-general Saree Aongsomwang, were accused of inciting unrest and trespass after they led about 100 demonstrators to climb over the parliament fence and sit down in the compound on Dec 12, 2007.

The Criminal Court yesterday sentenced Jon and five other defendants to two years each in prison and a 9,000 baht fine. The sentences were then reduced by one third because of their cooperation during the trial to one year and four months and a 6,000 baht fine.

The four others including Saree and Supinya were each sentenced to one year in prison and a fine of 9,000 baht. Their jail sentences were reduced to four months, and the fines to 6,000 baht.

Since none of the defendants has ever been imprisoned and they said they acted out of concern for the national interest, the court suspended the prison terms for two years.

In reaching the verdict, the court said that while the defendants cited their constitutional rights to peaceful assembly, they have to act within the law. Their act of locking the parliament gates with a chain and entering parliament grounds without permission caused a confrontation with officials.

Jon insisted he and his colleagues acted out of goodwill. "Our conscience told us to prevent harmful laws from being passed but we never intended to resort to violent means, engage in non-peaceful demonstrations or harm anyone," he said outside the court.

NBTC commissioner Supinya Klangnarong insisted she is still qualified to serve on the board of regulators because her sentence was suspended and she will appeal against it.

"Even though it seems like one of my legs is in prison already, I will continue to work as an NBTC member until the final decision is made by the Supreme Court," Supinya said.

Supinya said she never meant to cause anyone harm. She only entered parliament for a peaceful demonstration, she said. "This is not a crime but an act to protect the interests of society," said Supinya, whose parents also showed up to give her moral support at the court.

Prasert Apipunya, vice-secretary of the NBTC, said the law did not forbid those sentenced to a suspended jail term from serving in the commission.

Mr Prasert said the verdict is not final. Supinya can appeal against it.

Phairoj Pholpet, a Law Reform Commissioner who is among the 10 convicts, said the demonstration was a form of freedom of assembly and expression.

"We did not do it to protect our own interest but that of the public," Phairoj said. He urged social activists not to feel discouraged by the guilty ruling. He said human rights defenders will always have to sacrifice their own security and personal comfort.

Sirichai Mai-ngam, former president of the Electricity Generating Authority of Thailand's labour union who received the stiffer sentence, said the verdict should not undermine civil society.