After two full days of heated debate, the House of Representatives last night voted to approve the first reading of the government's 2-trillion-baht infrastructure loan bill. 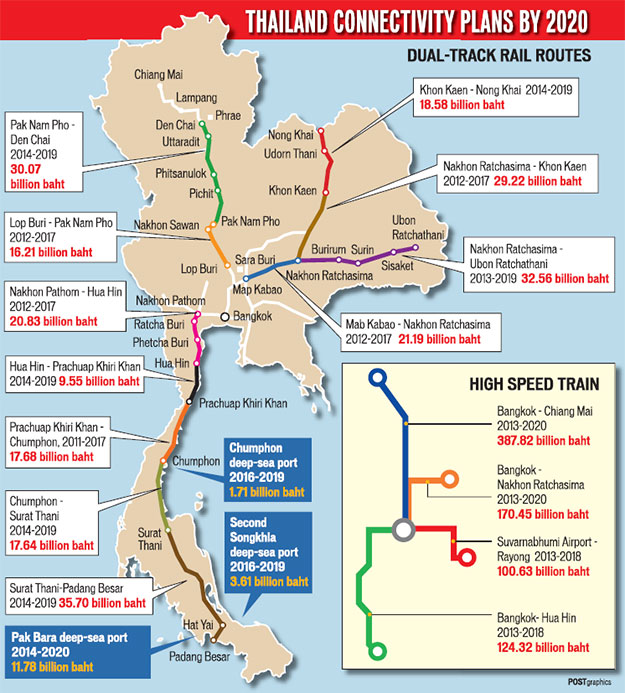 The 36-member committee now gets just 30 days to scrutinise the bill before it proceeds to its next reading.

The bill sailed through with 284 votes in favour with 152 against and 21 abstentions. After winning approval, the government proposed that the bill be scrutinised within 15 days but later agreed to the opposition leader's proposal to lengthen the period to 30 days to give more time for the committee to go through it.

The first meeting of the scrutiny committee is scheduled for Tuesday.

The 30-day scrutiny period means the process will not be completed before the end of the current parliamentary session on April 20.

However, the government intends to fast-track enactment of the bill by submitting it for its second and third readings when parliament opens for a special session in late May to consider the 2014 Budget Bill, chief government whip Amnuay Khlangpha said.

Before the vote yesterday, Deputy Prime Minister Kittiratt Na-Ranong said the government would not use the fiscal budget to finance infrastructure overhaul projects as requested by the opposition parties, led by the Democrats, because, if it did, it would not have sufficient funds left over for other areas of development.

Mr Kittiratt also said the calculation of the interest payments for the 2 trillion baht in borrowing, estimated at 3 trillion baht over the next 50 years, was based on a conservative approach with a rate of about 5%, higher than the rate now.

Regarding the high fares of high-speed trains, the transport minister explained that they target a different group of passengers to conventional trains. He said the government would lay double-track railway lines to improve conventional train services.

He accused the government of discriminating against people in the South, a Democrat stronghold.

He said discrimination against southern residents has continued since the administration of ousted premier Thaksin Shinawatra.

She said the previous Democrat government planned to develop a high-speed rail line from Nong Khai to Padang Besar in Malaysia via Bangkok.

This would make more sense than the government's planned routes to Rayong and Chiang Mai because more than 2 million tourists visit Thailand each from China and Malaysia, Ms Anchalee said.

She accused the government of kowtowing to its northern political support base by planning a Bangkok-Chiang Mai high-speed link.

Ms Anchalee said she did not oppose the rail link to Chiang Mai, but the government should first consider other routes. She noted that the number of visitors to Chiang Mai was smaller than to Chon Buri, and the value of tourism to Chiang Mai was far less than to the southern provinces of Krabi and Phuket.

Democrat MP for Phitsanulok, Juti Krairiksh, also questioned why the government had increased the cost estimates for high-speed railways from about 300 million baht per kilometre to 600 million baht.

He said high-speed railways in Spain cost only about 300 million baht per kilometre to build, even though daily wages in Europe were more than 10 times those of Thailand.