Vendors are not allowed to set up booths along the central median strip on Silom Road this Songkran, Bang Rak district chief Suachana Sudcharoen said on Friday. 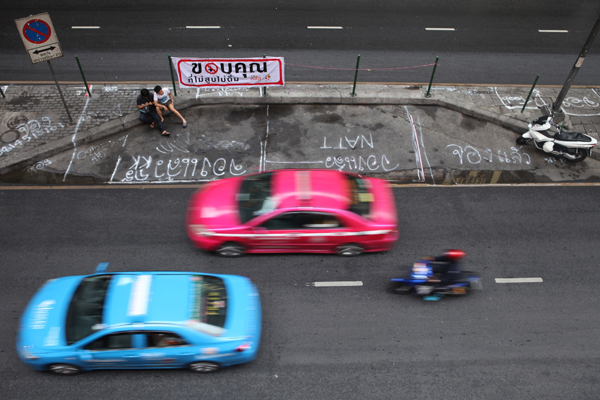 Two men, left and right, sit on the central median strip inside a white border intending to reserve vending space staked out for Songkran  on Silom Road on April 12, 2013. (Photo by Patipat Junthong)

Individuals have spray-painted pavements and parking spaces along the median divider with names and messages proclaiming the space "reserved" or with their contact information at night to reserve vending space  for the the festival begining on Saturday. Some people sit there, occupying and reserving the space in person.

Mr Suachana told the Bangkok Post that there were so many signs painted  on the ground there were not enough staff to remove them all.

It was very difficult to control because the people who did this came out late at night.

He warned that anyone caught spray-painting the pavements was liable to a fine of 500 baht for vandalism.

The Bang Rak district chief said booths and shops can be put up on the sidewalks along both sides of the road. People wanting to reserve space could contact the Bang Rak municipal office.

Mr Suachana said Silom Road will be closed to traffic from Sala Daeng to Nararom intersections between 2pm and 9pm on April 13-15 for Songkran celebrations.

Weapons and alcoholic beverages were strictly prohibited from the event areas, he said. Police officers and Thetsakit city inspectors would be patrolling the area to make sure the regulations were followed. 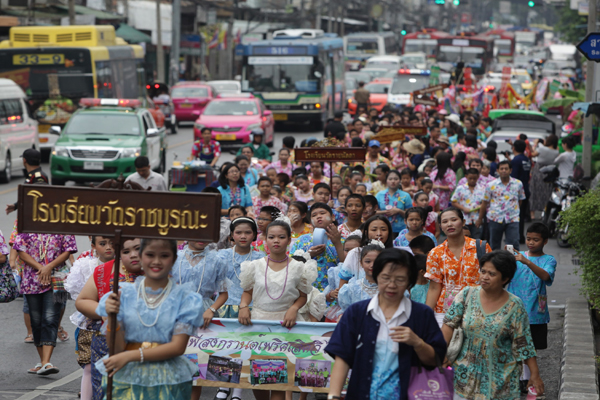