Red-shirt protesters decided to call off their rally against the charter court judges Wednesday after losing the backing of Pheu Thai, other red-shirt groups and, more importantly, ousted premier Thaksin Shinawatra, sources say.

Some ruling party MPs initially sponsored the protest by the Radio Broadcasters for Democracy movement formed by some red shirts, the Pheu Thai sources said.

The movement, led by a group of red-shirt community radio operators, called for the resignation of five Constitution Court judges who accepted an anti-constitutional amendment complaint for consideration.

The MPs had also joined the protest in front of the Constitution Court on Chaeng Watthana Road in Bangkok.

Once the MPs left, the number of demonstrators dwindled before they finally dispersed Wednesday. 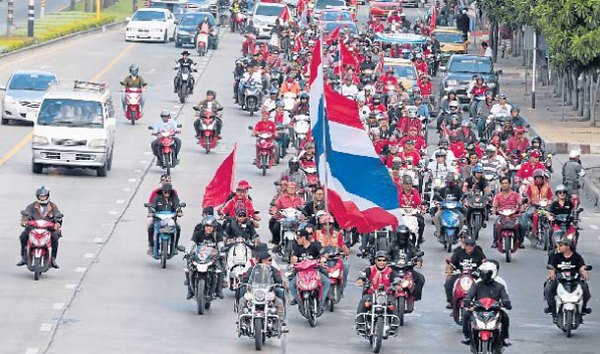 Red bikers: A group of red-shirt protesters on motorcycles head for parliament Wednesday to file a petition to the Senate to remove five Constitution Court judges. (Photo by Thiti Wannamontha)

The MPs' withdrawal was spurred by a desire to prevent the situation escalating to a point where it would harm the government, Mr Cherdchai said.

He said Thaksin was also worried about the rally and its impact on the government, and felt it had reached the point where it needed to end.

The party sources said Thaksin was concerned the protest against the court would have a boomerang effect on his sister, Prime Minister Yingluck Shinawatra, who has been under pressure due to her recent controversial speech in Mongolia regarding the negative impacts of the 2006 coup on Thailand's democracy and on Thaksin.

The protesters also lacked support from other key red-shirt groups. Kwanchai Praipana, a powerful red-shirt leader in Udon Thani, refused to send his supporters to Bangkok, saying he had other campaigns to deal with.

About 500 red-shirt demonstrators were at the Constitution Court in Laksi district Wednesday morning as their gathering entered its 17th and final day.

They then moved to parliament, where more red-shirt protesters joined them to increase their numbers to about 2,800, according to police. The number was much lower than their target of 100,000.

They returned to the court about 5pm Wednesday and declared they would file complaints with police charging the judges with committing treason.

The complaints will be filed nationwide, starting with Bangkok on Thursday.

The protesters filed a request Wednesday with the Senate to remove the five Constitution Court judges who agreed to accept a petition from a group of senators on whether attempts to amend Section 68 of the constitution violate the charter.

Opposition leader Abhisit Vejjajiva said the demonstrators were supporters of the government. He stressed that the government had a duty to maintain order and protect the judges.

Democrat MP Nipit Intharasombat said the demonstration was part of the government's attempts to discredit the judiciary, starting with the Constitution Court.

He said politicians in the executive and the legislative branches were joining forces and only the judiciary was standing in the way of their attempt to gain a monopoly of power.

He claimed the ruling party was trying to authorise the parliament president to supervise the appointment of judges in important courts.

Suriyasai Katasila, coordinator of the Green Politics group, said the red shirts in the Radio Broadcasters for Democracy movement were just government pawns who were being used to test the waters.