Eight decades after the 1932 revolution, Pridi Banomyong's controversial economic plan was the subject of a lively debate held Saturday to commemorate the 113th anniversary of the former leader's birth. 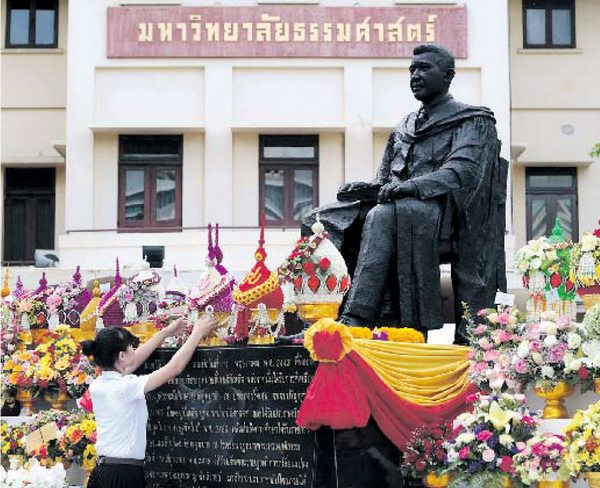 FOUNDING FATHER: A Thammasat University student pays her respects Saturday at a statue of Pridi Banomyong at the Tha Prachan campus. (Photo By Thiti Wannamontha)

The draft proposal was drawn up in 1933, a year after the Khanarassadorn, the group of civil servants of which Pridi was a key figure, overthew the absolute monarchy. But when the plan, which called for the nationalisation of all land and labour, was violently rejected, Pridi went into voluntary exile.

Mr Thapanan was speaking at a seminar entitled "Draft Economic Plan and Absolute Democracy" held to commemorate Pridi Day at Thammasat University, which he founded in 1934.

Pridi's economic plan was developed from the solidaritism philosophy and movement - which combined two key principles of socialism and Rousseau-styled liberalism, the France-educated Mr Thapanan said.

Pridi, who was prime minister of Thailand for five months in 1946, "meant the draft economic plan as a proposal for further discussion, not to be implemented right away", he said

"But his proposal was shot down and he was labelled a communist, sending the key man of the Khanarassadorn into exile."

Pridi's plan was to nationalise land and labour, much of which he believed was lying idle. Non-cultivated land should be re-allocated for the maximum benefit of agriculture and farmers, while all profits and gains should be fairly shared among those exercising their labour resources, he proposed.

Lae Dilokwittayarat, an economics scholar at Chulalongkorn University, said the statesman's main contribution to Thai society was his work in reforming the land and tax system.

But this was also what got him into trouble, and no other politicians or subsequent governments have touched it since, Mr Lae said.

"It wasn't the assets [land] that shook things up but rather the shift of power that would have resulted had Pridi's economic plans been implemented. Therefore there was strong protest," he said.

"At that time, it was the royalists who owned most of the land, while now it's the capitalists and businessmen. So our country still cannot undertake land reforms," Mr Lae said.

The former statesman's quest for democracy has been carried on by various democratic movements," Mr Charnvit said.

Pridi's economic plan was put to parliament just a year after the overthrow of the absolute monarchy, he said. This prompted King Prachadipok to support Phraya Manoprakorn Nititthada - the country's first prime minister - in closing down the fledgling parliament, voiding certain constitutional clauses, introducing the first anti-communism act, and sending Pridi into exile for nearly a year, Mr Charnvit said.

Pridi later returned to found Thammasat University, which he hoped would lay the foundations for democracy, he said.

Malaysia take on Tajikistan in the King's Cup final but as far as the local fans are concerned, all eyes will be on the third-place showdown between hosts Thailand and Trinidad and Tobago on Sunday.

Drive to up kids' reading abilities

The Thai Health Promotion Foundation (ThaiHealth) has joined hands with the Bangkok Metropolitan Administration (BMA) to promote early childhood reading amid concerns about learning loss among kids during the Covid-19 pandemic.