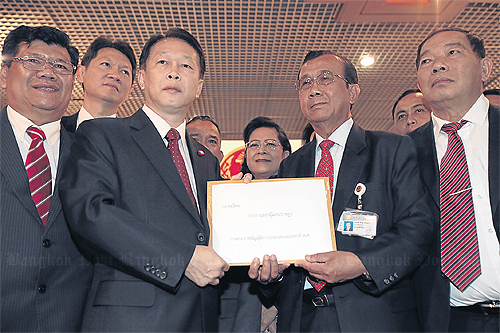 Mr Piraphan, chief of the party's legal team, accompanied by a number of party MPs, handed the bill over to Deputy House Speaker Charoen Chankomol.

A total of 163 Pheu Thai MPs have signed in support of the bill seeking a blanket amnesty for people involved in past political violence.

Mr Piraphan said the bill initiated by Mr Chalerm would grant an amnesty to all people involved in political offences from 2006 to the present time, in line with the government's policy of national reconciliation and restoring unity.

The bill originally had six sections.

However, Section 5, concerning compensation for those affected by political unrest, had been expunged because it concerned financial matters which would require Prime Minister Yingluck Shinawatra's endorsement.

Mr Piraphan said the main thrust of the bill is outlined in Section 3, which proposes to clear all political offenders from 2006 onwards of any wrongdoing.

Political offenders, be they those already convicted by the courts, those being investigated, those whose prosecution is pending, or those charged for expressing political opinions, would be exonerated.

"As for Section 4, which many people claim is designed to return 46 billion baht in assets seized from former prime minister Thaksin Shinawatra, the court

[the Supreme Court's Criminal Division for Holders of Political Positions] has already issued an order to confiscate it," he said.

The only way to return the money is by passing a finance-related bill, Mr Piraphan said.

Mr Charoen said Mr Chalerm's draft legislation would certainly not be proposed for deliberation during the extraordinary session of parliament from next Wednesday to Friday to deliberate the 2014 Budget Bill.

It would be up to a House meeting to decide whether it would be moved up for consideration along with other reconciliation bills filed earlier, he said.

Mr Piraphan admitted Thaksin was the person who had been most affected by the past political unrest following his ouster in the 2006 coup.

Mr Piraphan insisted Pheu Thai MPs will push ahead with the bill to help Thaksin.

However, he said the Chalerm bill may not be included in the House agenda when parliament reconvenes on Aug 1.

He said he will discuss with other party MPs whether to incorporate the Chalerm bill into the amnesty bill proposed by Samut Prakan MP Worachai Hema, which is currently at the top of the House agenda waiting to clear its first reading.

Kwanchai Praipana, leader of the red shirts in Udon Thani, yesterday pledged his full support for the Chalerm bill to bring Thaksin home a free man.