Chalerm vows Thaksin will be home this year
Thailand
Politics

Chalerm vows Thaksin will be home this year

Behead me if he isn't, deputy PM tells reds

Addressing a red-shirt rally in Udon Thani on Friday, Mr Chalerm defended his reconciliation bill which he hopes will be instrumental in bringing the deposed premier home.

"If I fail [to bring Thaksin home] I'll accept sole responsibility. You can behead me," he told the gathering.

If opponents come out on the streets to resist his draft bill, red shirts should stay in their respective provinces and not march on Bangkok to mount a counter-rally, he said.

Mr Chalerm said he alone had decided to remove Section 5 of his bill, which concerned financial compensation for people affected by the actions of the state. Any finance-related bill requires the prime minister to endorse it first. 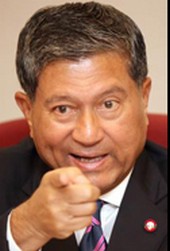 Chalerm: Behead me if he isn't be home this year.

His reconciliation draft bill was fair to everyone, he said, denying it was meant to directly benefit Thaksin.

The bill is not on parliament's agenda for its first reading.

Somkid Cheukong, a Pheu Thai MP for Ubon Ratchathani, said the Chalerm bill should not be moved up the agenda as it would touch off social conflict.

Meanwhile, the Pheu Thai Party has denied Prime Minister Yingluck Shinawatra was behind the push for legislation to exonerate political offenders.

The ruling party's deputy spokeswoman Sunisa Lertpakawat said yesterday neither the premier nor the government was responsible for the bills.

She was referring to the reconciliation bill sponsored Mr Chalerm, which has not entered parliament, and the amnesty bill proposed by Samut Prakan Pheu Thai MP Worachai Hema.

The Worachai bill is at the top of the parliamentary agenda, awaiting a first reading debate.

Lt Sunisa said the only piece of legislation Ms Yingluck will forward to parliament on Wednesday is the 2014 Budget Bill.

She claimed the opposition Democrat Party has tried to mislead the public by suggesting Ms Yingluck and the government were actually behind the push for the Chalerm and the Worachai bills. Lt Sunisa said the two bills are sponsored by politicians, and the executive branch had nothing to do with them.

The Democrats earlier called on Ms Yingluck to clarify her stance on the reconciliation and amnesty bills.

Sathit Pitutecha, Democrat MP for Rayong, said the bills could whitewash the crimes of Thaksin, Ms Yingluck's elder brother, and seek to return 46 billion baht in seized assets to him.

He said even though Mr Chalerm had decided to remove Section 5 of his bill, there are still problems with other parts of the bill.

Lt Sunisa also said the Worachai and Chalerm bills could not be combined at the scrutiny stage because their contents are different.

The Chalerm bill offers a blanket amnesty to those involved in political unrest, from the 2006 military coup to the 2010 clashes between the red shirts and the military at Ratchaprasong intersection.

The Worachai bill seeks to offer amnesty to people being investigated for, or convicted of crimes related to political violence. However, it will not cover protest leaders or those who ordered the use of force to quell the protests.

Meanwhile, Democrat Party spokesman Chavanond Intarakomalyasut said yesterday he believed Thaksin and the Pheu Thai Party were more inclined to support the Chalerm bill as the deposed premier stands to gain a lot more from it than he would from the Worachai bill.