The underdog Democrat Party is counting on sympathy, its reputation for consistency, and controversy over government policy to end its political jinx in Don Muang. 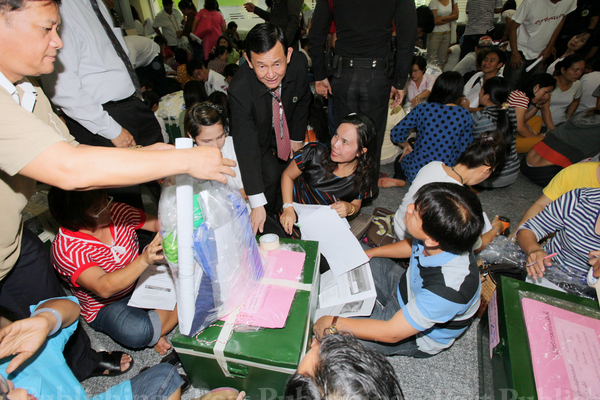 The byelection on Sunday in the northern suburb of Bangkok pits former TV personality Tankhun Jitt-itsara of the opposition against ex-actor Yuranunt Pamornmontri of the governing Pheu Thai Party.

The Election Commission is hoping for a 60% turnout of voters and expects to announce the unofficial result by 7pm, according to EC commissioner Prapun Naigowit

Democrat leader Abhisit Vejjajiva and Prime Minister Yingluck Shinawatra campaigned for their representatives in the district on Saturday in a final push for victory.

Don Muang has long been a bitter political pill for Thailand's oldest party. The last time the Democrats had an MP in the constituency was in 1976, when Mr Abhisit was only 12 years old.

Pheu Thai and its predecessors - Thai Rak Thai and People Power - have never tested defeat in elections in the district. Its strength and organisation was underlined by its influence in the Bangkok governor election in March.

Mr Tankhun said on Saturday during a campaign stop that he had proved to people in the district that he had never left them.

He pleaded for an opportunity to represent them in Parliament after coming up short by 8,000 votes in the general election in 2011.

The Democrat challenger reminded voters that he was by their side during the great flood of 2011 and helped evacuate residents from the district, one of the worst hit.

Mr Abhisit said he was satisfied with a better reception from voters in the district for the party this time around.

The opposition leader on Friday urged voters to back the Democrats on Sunday. This, he said, would send a message to the government that people oppose polices such as the spending spree for dubious megaprojects and the mishandling of the rice pledging scheme, which critics say has lost up to 260 billion baht.

Voters in Don Muang will represent people nationwide to air their opposition to the government, he said.

Ms Yingluck on Saturday appealed for a Pheu Thai win to stamp voters' approval on the projects launched by her government and to show their backing for all the policies Pheu Thai aims to carry out in the future.

Mr Yuranunt said he was counting on development and mass transit projects to go to Don Muang to keep voters in the Pheu Thai camp.

Jatuporn Prompan, a key red-shirt leader, on Friday ridiculed the Democrats for using the rice project to attack the government and draw votes in urban Don Muang.

He urged red-shirt members in the district to vote for Mr Yuranunt to "embarrass" Mr Abhisit and Suthep Thaugsuban, his deputy when the Democrats were in power, the two men he holds responsible for the bloody end to the red shirt street protests in Bangkok.

Don Muang was the best place to teach the Democrats a lesson, he added.

The byelection was called to find a new MP to replace Karun Hosakul of Pheu Thai, who was disqualified by the Supreme Court for violating election law.

Pheu Thai, aware of the higher stakes this time, asked Mr Yuranunt to resign from his party-list MP position to contest the poll against Mr Tankhun.

Key leaders of the two parties admitted on Friday that the race would be closer than last time.

Mr Karun has been barred from politics for five years by the Supreme Court's Election Cases Division. His defamation of his Democrat rival had an influence on the outcome of the 2011 vote, the judges ruled.