Ousted premier Thaksin Shinawatra has assured rice farmers that the government will not leave them out in the cold and will raise the paddy pledging price once the world market price picks up.

Thaksin's message was conveyed Monday before rice farmers' scheduled mass rally Tuesday at Government House to protest against the government's decision to cut the rice-pledging price to 12,000 baht per tonne from 15,000 baht. 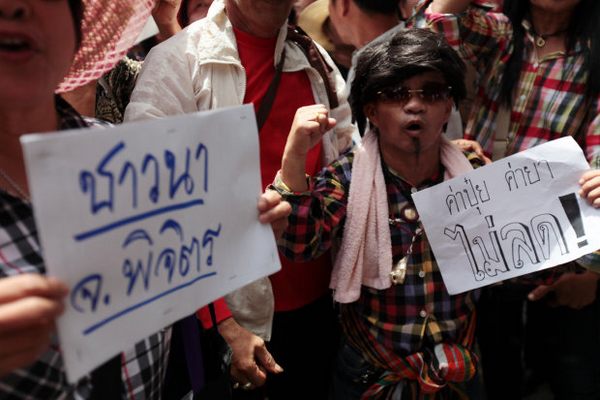 Rice farmers from provinces around Bangkok began arriving in the capital on Monday to prepare for major protests on Tuesday against the government's decision to reduce payment for their rice by 20 per cent.

Speaking after meeting Thaksin in Hong Kong over the weekend, Noppadon Pattama, Thaksin's lawyer, said Monday that Thaksin sympathises with the rice farmers over the price cut.

"Thaksin has confirmed that the new pledging price is temporary and will be effective until the end of September," Mr Noppadon said.

If the global rice price starts to pick up, the government will raise the price, said Mr Noppadon, quoting Thaksin.

"The government will not abandon the farmers. Currently, there are a lot of issues at hand and once the government can raise the price, it will definitely do it," Thaksin was quoted as saying.

Mr Noppadon said that Thaksin has asked Pheu Thai MPs to clarify the need to slash the pledging price to the rice farmers.

He said Thaksin told him a cabinet reshuffle would not happen for the time being and Prime Minister Yingluck Shinawatra would make the decision when the time was right.

Meanwhile, the Interior Ministry is making a last-ditch attempt to dissuade rice farmers from gathering in Bangkok today, ordering provincial governors to try and act as go-betweens.

Interior Minister Charupong Ruangsuwan said he has instructed governors to invite the farmers to sit down for talks and only protest at provincial halls.

"The farmers don't have to travel to Bangkok. They can go to the provincial halls where the governors will accept their complaints on the government's behalf," he said.

Mr Charupong denied the move was a government attempt to block rice farmers from rallying in the capital.

"We aren't blocking them because it will only make them more frustrated and lead to misunderstandings," he said.

He said he asked the governors to be patient and reasonable and not to view the farmers as the government's foes.

Two companies of police officers will be deployed in the Government House compound, said Pol Maj Gen Parinya Chansuriya, deputy chief of the Metropolitan Police Bureau. More will be positioned around the premises to boost security and direct traffic.

He said their mission was to prevent the protesters from breaking into any government buildings.

"There is nothing to be worried about. The farmers are here to call for justice," said the officer.

Former prime minister Somchai Wongsawat said Monday the rice farmers should be allowed to speak their minds but noted that they could do so in their provinces.

"Don't block them. Let them speak. But they don't have to come to Bangkok," he said.

In Phichit, about 100 farmers Monday streamed into a police station in Muang district to file a complaint against a rice mill owner accused of stealing rice.

The complaint was triggered by a inspection by the Commerce Ministry which found 8,000 tonnes of rice worth 100 million baht missing from a warehouse operated by L-Gold Manufacture Co.

The rice farmers had not been issued with prathuan papers which they need to claim payment at banks for the rice they have pledged. Pol Maj Gen Krisana Siripiyawat, chief of Phichit police, said 30 teams of police were prepared to take statements from the farmers.

The Marketing Organisation for Farmers, which owns 4,000 tonnes, has already filed a complaint with police.

According to the Commerce Ministry's Department of Internal Trade, L-Gold Manufacture Co was formerly known as Kongkiat Rice Milling. It had been blacklisted but was allowed to re-apply for the rice-pledging programme after being removed from the list.