The newly formed anti-government "People's Army" hopes to mobilise at least 30,000 people to join a rally in Bangkok when the House resumes next week to deliberate the amnesty bill of Pheu Thai MP Worachai Hema. 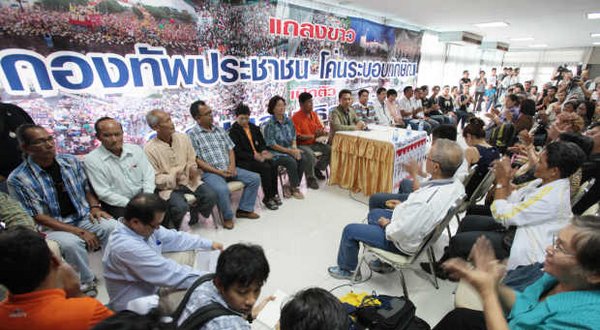 Leaders of the new "People's Army" held a five-hour meeting on Thursday, then emerged to announce they hope to hold coordinated rallies against the government, including a big protest in Bangkok on Aug 4.

Thaikorn Polsuwan, an ally of the anti-red shirt People's Alliance for Democracy (PAD) in the Northeast, made the announcement yesterday after a five-hour meeting of a network of anti-government elements at the Royal Turf Club (Nang Loeng Race Course).

The People's Army Against Thaksin Regime comprises several groups such as the Pitak Siam group, and the Thai Patriots Network.

Pitak Siam returned last Sunday under the new leadership of retired admiral, Chai Suwannaphap, who threatened to stage a rally on Aug 4, three days before the debate on the Worachai bill, if the government ignores its demands including the dropping of all amnesty bills.

Mr Thaikorn said that the People's Army has agreed that the group's provincial chapters will mobilise supporters to join the mass rally in Bangkok on Aug 4.

Parliament is scheduled to reconvene on August 1 and the government whips have resolved to move Mr Worachai's bill to the top of the meeting agenda for deliberations on Aug 7-8. 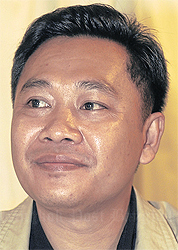 The rally is aimed at "overthrowing the Thaksin Shinawatra regime", Mr Thaikorn said.

He declined to provide tactical details of the rally. He said the group would pursue legal action against any officials who try to violate their legal right to peaceful assembly.

He said the group will raise the issues of rising oil prices and soaring living costs, and they will try to persuade people, particularly those in the provinces which are the strongholds of the red shirts, such as Nonthaburi, Samut Prakan and Pathum Thani, to come and join the rally.

The group will go door-to-door and use social media to drum up support, Mr Thaikorn added.

He said if parliament passes any laws to whitewash the crimes of Thaksin, the PAD may decide to mobilise its supporters to rally against it.

Tul Sitthisomwong, leader of the anti-red shirt multicoloured movement, said the group will definitely come out to protest against the amnesty bill at parliament.

Parliament is also preparing for expected demonstrations during the session. Deputy House Speaker Wisoot Chainarun asked police yesterday to deploy up to 600 officers inside the parliamentary grounds on Aug 7.

CHIANG MAI: A total of 2.5 million methamphetamine pills and 700 kilogrammes of crystal meth, or ice, have been seized in three drug cases in Lampang, Chiang Mai and Phrae provinces, under the jurisdiction of Provincial Police Region 5.

JAKARTA: The Indonesian stadium stampede that left 131 people dead has sparked anger against the nation's police, whom critics have long accused of using excessive violence.