As it approaches the midway point of its four-year term next month, the Yingluck Shinawatra government's broad policy platform appears to be sputtering. 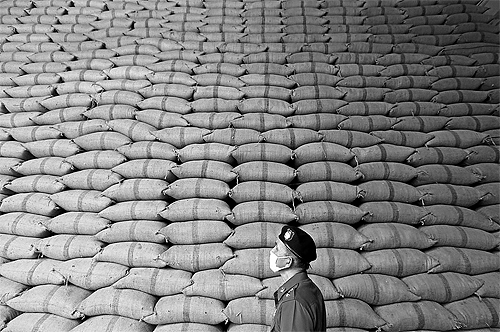 A policeman inspects rice at a warehouse in Suphan Buri amid growing criticism that the populist rice-pledging policy is causing the country huge fiscal liabilities. PATIPAT JANTHONG

It is centred on what can be called a second-generation populism. But unlike its precursor, this round of policies _ catering mainly to the underbelly of the Thai economy _ has not resulted in a longer-term uplift in economic growth. Instead it has incurred fiscal costs that will constrain future budgets and burden downstream generations.

That the first set of populist policies was more successful than the second is attributable to favourable cyclical conditions and sounder policy calculations.

In turn, the failure to correct and reset the current spate of expenditure-happy policies will raise Thailand's political temperature as parliament reconvenes next week.

Contrary to the fear-mongering at the time, the signature pro-poor policies from a decade ago did not bankrupt Thailand. The government of Thaksin Shinawatra, Ms Yingluck's eldest brother, initially came out with three main policy planks _ cheap universal healthcare at 30 baht per hospital visit, a micro-credit scheme known as the village fund, and rural debt suspension for three years.

These were complemented by the One Tambon, One Product (Otop) campaign of harnessing local knowledge and facilitating rural handicrafts for larger markets at home and abroad. Add-ons came later, such as cluster-development projects and the campaign to make Thailand the hub of important industries.

The policy costs back then were based on reasonable assumptions and cost calculations. All policies from healthcare and village fund to debt suspension could be modelled with some accuracy.

They were fundamentally internal, based on conditions at home. And they were driven by the logic of investment, as evident in the village fund and debt suspension, for example. Otop was a kind of public good where the government provided some marketing, information and facilitation, and the rural grassroots sector was left to do the heavy lifting. It was not a budget burner.

Thailand's government debt to GDP ratio declined markedly over 2001-2006, thanks to cyclical upturns at home after the doldrums of the 1997-98 crisis and favourable external conditions.

The imaginative pro-poor policies of the early 2000s incurred costs and trade-offs but held out the promise of longer-term traction and growth trajectory. Unsurprisingly, policies such as the village fund, 30-baht healthcare and Otop remain appealing to this day despite all that has happened in Thailand since.

Not so the second run of Thaksin's populism as implemented through his Pheu Thai Party and his sister's government. Policy calculations ahead of the July 2011 election were shoddy and poorly conceived _ their adverse effects are now on display and policy disarray is becoming rife.

The gravest mistake in the current populist platform is that it messes with the market outside Thailand. Local market distortions are bad enough but their adverse effects ultimately can be managed and contained. But messing with the world market through the rice-pledging scheme, for example, courts huge fiscal liabilities.

The rice-pledging scheme appears premised on at least two motivations. First, it was designed to win votes in rice-producing constituencies, which are split among the various parties, mainly Chartthaipattana, Bhumjaithai and Pheu Thai. Penetrating and capturing these farming constituencies would enable Pheu Thai to dominate as its predecessor Thai Rak Thai did in the February 2005 election.

Second, it was part of a consumption-driven growth strategy, increasing purchasing power in the rural sector and aiming for multiplier effects up and down production and consumption chains.

The rice-pledging policy is understandably popular with farmers but its mounting bill of anywhere from 136 billion baht to more than half a trillion, depending on who is counting, makes it problematic. The government's decision to reduce the 15,000 baht per tonne price to 13,000 baht only to reverse this within two weeks is proof it was an expedient and myopic policy to win votes.

Moreover, the world rice market is crowded with other producers, such as Vietnam and India and even the likes of Pakistan.

Consumers were given the impression they had 100,000 baht to gain if they purchased their first car. Blind and handicapped buyers lined up to enjoy the benefit as proxies for relatives and friends. Cars were booked from factories, delivered to dealers, but some stayed at dealerships as customers changed their minds or discontinued lease payments.

The other policies that have to do with the numbers three and five, such as the 300-baht daily minimum wage and the 15,000 baht monthly salaries for college graduates, have lacked coherence and thrust. These policies are not generating a sustainable consumption drive for domestic demand-led growth but instead are drifting.

To reset its populist course, Thaksin and the Yingluck government will have to bite the bullet and revert to transparent and countable subsidy-led policies to help farmers. With the mounting costs from the failure to manipulate world rice prices, the government would be better off handing out money to farmers. It would be calculable and containable within the budget.

Thaksin's aura of populist magic has been eroded, and the Yingluck government so far has proved incapable of coming up with the new policy imagination and inventiveness needed to propel economic growth and shore up its sagging popularity. Its policy proposals from the 350-billion-baht flood management and 2-trillion-baht mega-infrastructure investment to the 2.5-trillion-baht budget for the next fiscal year are all contentious and opposed in and outside parliament.

Yet this government continues to be the only game in town as the main opposition party badgers and hectors with no alternatives to offer.

This means Thailand's political tensions are likely to rise after parliament reconvenes with crucial expenditure and amnesty bills looming. Two years are a remarkably long time for Ms Yingluck's rule and two more years may be a stretch too far. The desirable outcome for Thailand is how political change must come from within its messy democratic system rather than from outside.