The government has decided to arrange a charter flight to evacuate another 332 Thai citizens out of strife-torn Egypt as anti-government protests spread to the outskirts of Cairo. 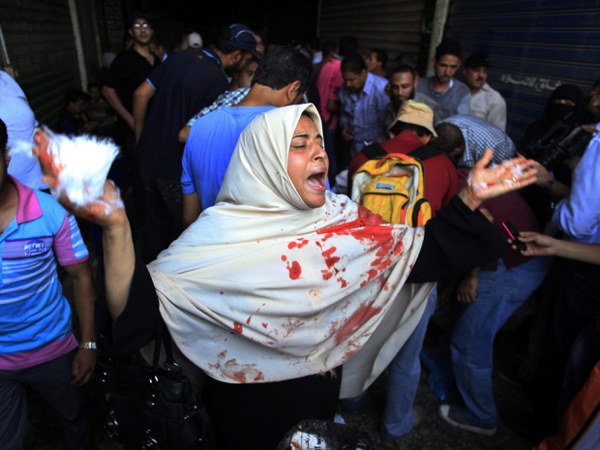 An Egyptian woman with blood on her clothes screams during clashes between security forces and supporters of Egypt's ousted President Mohammed Morsi in Cairo. Continuing protests and violence have convinced more Thais to flee the country and return home. (AP photo)

Chalit Manitayakul, Thai ambassador to Egypt, said the Thai nationals have to be evacuated for their safety because most of them live near protest zones and a surge in crime had taken place recently.

Most of the 332 nationals are students who are pursuing their education in Egypt.

They will be flown directly today from Cairo to Bangkok on a chartered Egypt Air Boeing 777.

A total of 614 Thais have been evacuated from Egypt in the past week.

The latest group is expected to arrive at Don Mueang airport about 8.15am tomorrow.

Relatives can check the identities of the evacuees by calling a special centre on 02-5751047 to 49.

Mr Chalit said the situation in the centre of Cairo has calmed down and was not as chaotic as it had been over the past several.

However, demonstrators have moved their protests towards the city's outskirts.

The Egyptian military was closing down roads and important public venues and few people were walking on the streets.

Apart from the latest batch of 332 evacuees, another 164 Thai students have also expressed a desire to return home.

Mr Chalit said they would be split into smaller groups and sent back to Thailand aboard commercial flights with Egypt Air, Etihad, Emirates and Singapore Airlines.

Mr Chalit said about 200 Thai workers have said they did not want to come back because they have safe houses to stay at.

Some said they were afraid of being fired if they returned to Thailand.

"I am quite happy to be sending at least 90% of the Thai students home. I could not sleep for a long time because I was concerned they would be in danger [if they continued to stay]," the envoy said.

He said embassy staff had been busy taking care of the students since early June.

"My eight-year-old son cried because he could not go outside for months but he later understood after he saw me coming home tired every day," said Mr Chalit, who has been based in Cairo for three and-a-half years.

"We are working under a lot of pressure," he said.

However, Mr Chalit said the present violence in Egypt was not as bad as that back in 2011 because it was clear who the parties in conflict were.

The Thai Students Association said yesterday that a total of 406 students had asked to return to Thailand during the last two days but since then only 332 had confirmed their travel plans.

The students who cancelled their trips would not be allowed to board charter flights, it said.

The new rule was set because almost 100 students had changed their minds at the last minute on Sunday, causing a C-130 plane provided by the Thai air force to fly back without passengers the next day.

The association would continue to receive requests from those who wished to return home until midnight today before allowing the Thai embassy to take over the matter.

He said the meeting decided that there was no need for the time being to solicit the help of the air force in the evacuation plan.

"If more Thais want to return home, the embassy will be able to find another charter flight to evacuate them," Mr Nuttavudh said.

"In addition, Thai Airways International informed the meeting that there are 80 vacant seats on its flights from Dubai to Bangkok every day."

Health authorities have extended coronavirus screening to cover visitors from Japan and Singapore.

WASHINGTON - Jeff Bezos, founder and CEO of Amazon and the world's richest man, said Monday he was committing $10 billion to a new fund to tackle climate change.