The rubber farmers' protest in Nakhon Si Thammrat province entered its sixth day on Wednesday, with the leaders intent on guarding their rally sites to prevent riot police dispersing them. 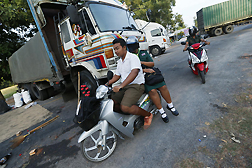 Trucks remain parked across the main southern highway, blocking all lanes, and the railway tracks between Ban Toon and Cha-uat railway stations in Cha-uat district, as planters demand the government guarrantee a higher price for their sheet rubber. They ask why the government favours rice farmers with heavy subsidies.

Somporn Yodrabum, one of the protest leaders, said the government should avoid using force against them and should settle the dispute through negotiation.

"If force is used to break up the protest the situation will certainly escalate," Mr Somporn said.

Reports said the protesting farmers also planned to block a main road in Nakhon Si Thammarat's Chian Yai district on Tuesday night but were foiled when 500 police were deployed there ahead of them.

Agriculture and Cooperatives Minister Yukol Limlaemthong, also a deputy prime minister, said the farmers have the right to protest but must stay within the law.

"We'll have to explain the rubber price situation to the farmers.

The South is the political stronghold of the opposition Democrat Party.