Electoral constituency boundaries should be redrawn if all 200 senators are to be elected under a proposed charter amendment, Democrat Party and opposition leader Abhisit Vejjajiva said yesterday. 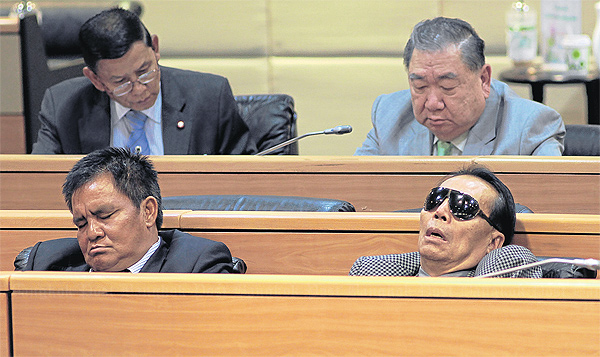 Two members of parliament doze off during a joint session yesterday to deliberate the second reading of a bill amending a section of the charter which deals with the composition of the Senate. CHANAT KATANYU

Mr Abhisit was speaking during a joint parliamentary session deliberating the second reading of a bill seeking to amend the constitution's provisions regarding the composition of the Senate.

Mr Abhisit stressed that the role of the Senate differs from that of MPs. The Senate's authority is not directly linked with the executive's tasks and senators must always maintain impartiality, he said.

The Senate having appointed members does not necessarily mean it is undemocratic, Mr Abhisit said.

Instead, the government is trying to push through charter changes first, raising suspicions about whether it was serious about political reform, he said.

The Democrat Party believes the ultimate aim of the government's charter changes will be to benefit ousted premier Thaksin Shinawatra, widely viewed as the Pheu Thai Party's de facto leader.

The section also seeks to have all senators elected, rather than the current system whereby half are appointed, and designate each senator a province as a constituency.

Democrat MP for Surat Thani Suthep Thaugsuban pointed out that Thailand's election process has always been plagued by fraud and vote-buying.

He stressed the Senate must comprise both elected and appointed members to prevent interference from politicians.

A recent survey conducted by the National Institution of Development Administration (Nida) Poll revealed yesterday that 63.6% of respondents believe all senators should be elected.

Just over 25% said half of the senators should be elected and the other half appointed.

The pollsters at Nida surveyed 1,249 people nationwide on Monday and Tuesday.

Asked whether family members of serving MPs should be allowed to run for the Senate, 65% said they should be barred to prevent bias when considering contentious issues.

About 25% said family members should be allowed to stand for the Senate because they may hold different opinions.

Just over 47% of respondents agreed that senators should be allowed to serve more than one term, while almost 46% said they should serve only one term. Parliament last night endorsed Section 3 of the amendment bill which stipulates the 200 senators will come from direct election by a vote of 344 to 140.