A Thai company owned by consumer goods giant Unilever has rejected accusations of discrimination after its competition featuring a skin whitener and offering university "scholarships" was seen as favouring paler-skinned students. 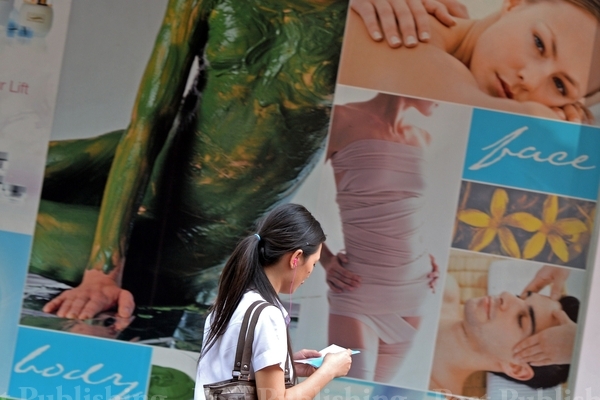 A woman walks past a body treatment shop in Bangkok. From breast-slapping and gold thread face-lifts, to vaginal whitening soaps and olive oil penis enlargements, image obsessed Thais are going to ever increasing extremes in the quest for beauty. (AFP file photo)

Citra Thailand, which describes itself as a leading brand for "white skin products", has aired a television advert set on a university campus in which two presenters ask female students what would make them "outstanding in uniform".

The first girl to be asked, who has a darker complexion, appears confused by the question and says she does not know. But a much whiter-skinned girl judged by presenters to have "beautiful" skin answers with the Citra product slogan.

Posts in social media criticised the company for apparently linking education with whiter skin - which is already widely associated with higher economic status because it suggests a person is not a labourer exposed to the sun.

"Now, you can get a scholarship because of white skin, not because of good studying, not if you are poor and dark," said one post on the well-known Thai online comment website pantip.com.

Another complained that the advert had "clearly compared" the darker and lighter-skinned students, with the first girl appearing "glum", while whiter students laughed and had "big shining smiles".

Citra, which is part of Unilever Thailand, said the advert was in no way promoting racial discrimination.

"Our company has good consumer responsibility standards ... We welcome all opinions and comments, but we are sincere and do not have any intention to have skin discrimination," said a Unilever Thailand spokeswoman on behalf of Citra.

The "Citra Search for clear, soft and glowing skin", which runs throughout October, asks female students to send pictures of themselves in their uniforms holding a Citra product.

"We want to give the scholarship because the contestants are university students - but we will not check whether the winners actually spend it on their education," said a member of the competition campaign team at Citra.

Unilever, which has more than 400 brands sold in over 190 countries, has its main offices in Britain and the Netherlands.

Skin whitening creams abound in Thailand, helped by the popularity of white-skinned models and actors on billboards and television.

In September, US firm Dunkin' Donuts said it was pulling an advertisement in Thailand featuring a woman with black face make-up after a human rights group described it as racist.

The "charcoal donut" ad caused little controversy in Thailand, however, while in social media sites there were differing views about whether the ad was offensive.