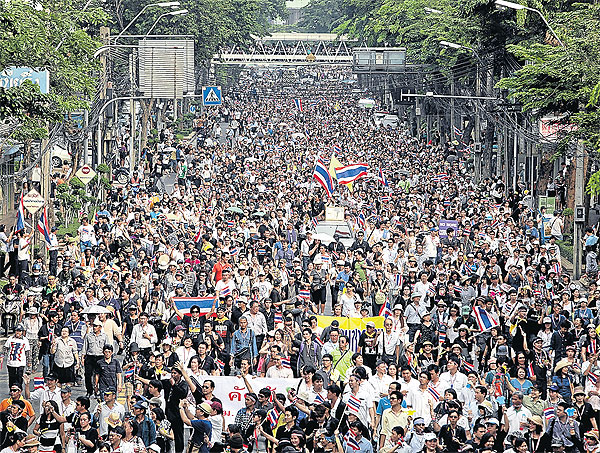 Anti-amnesty bill demonstrators march from Asok intersection to converge with another protest group from the Silom area at the Royal Thai Police Headquarters near Ratchaprasong before heading to Ratchadamnoen Avenue. THITIWANNAMONTHA

After 12 hours of debate, the senators shot down the controversial bill by 140 votes to 0.

Govt needs to own up to its amnesty error

However, the move is not in line with the demand of Democrat Party protest leader Suthep Thaugsuban who urged the Senate to vote that the bill be classified as a financial bill and return it to the prime minister so that she kill the bill by refusing to endorse it.

Without doing so, the government can revive the bill after a 180-day period.

Government whips will also submit a motion seeking a joint sitting of parliament on Wednesday to discuss how to resolve the current political crisis.

The Democrat Party's demand for the amnesty bill to be dropped by 6pm on Monday was rendered impossible as the Senate could not finish deliberating it in time.

The Democrats vowed at one of their protests that the government would "face consequences" if the deadline was missed.

Chief whip Amnuay Khlangpa said parliament must now get involved in case the Senate fails to resolve the amnesty issue.

A general debate in the House, which would not require a vote, would probably take place after parliament completes its deliberation of the Thai-US free trade agreement, he said.

Mr Amnuay said the government whips will consult with parliament's legal team to see if there are any other ways to have the amnesty bill dropped other than by the Senate rejecting it and returning it to the House of Representatives.

Many critics question the government's promise not to resurrect the bill after the 180-day mandatory suspension period required by the charter if the Senate rejects it.

Mr Amnuay said the government whips have also set up a team led by Pheu Thai MP for Phrae Worawat Ua-apinyakul to monitor the political situation.

He said Pheu Thai MPs have been ordered not to travel overseas while the House is still in session.

The Senate yesterday spent the first few hours of its debate trading barbs over the Group of 40 Senators' boycott of a sitting called originally on Friday to axe the amnesty bill. Senate speaker Nikom Wairatpanich called the meeting so senators could vote to reject the amnesty bill, but it did not take place due to the lack of a quorum. The Group of 40 Senators refused to join.