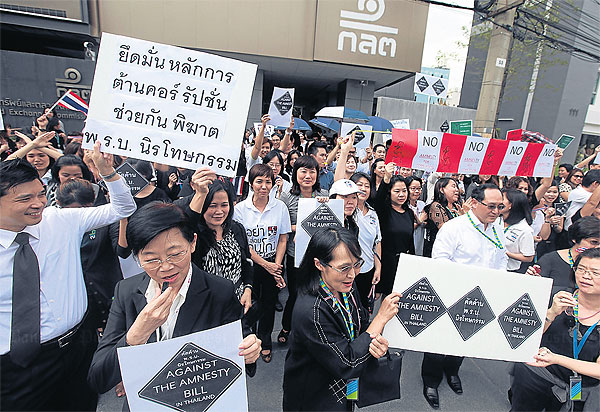 More than 100 staff of the Securities Exchange Commission gather in front of the agency yesterday to protest against the amnesty bill. KITJA APICHONROJAREK

However, the demonstrations will not be a serious concern for investors as long as they remain peaceful, he said.

Groups of protesters yesterday marched from four corners of the capital to Democracy Monument to show their discontent towards the government.

Mr Kittiratt said the main concern for investors is the lack of democratic principles. If the demonstrations turn violent, investors' confidence would be shaken tremendously.

"I would say the lack of democratic principles is the root cause of great damage to an economy. For example, some countries that struggle to put in place democratic mechanisms, such as elections, have experienced growth stagnation for decades," said Mr Kittiratt.

While differences in opinions are normal in a democracy, the escalating political situation has to be monitored closely, he said.

He said that since the amnesty bill has generated deep social division, it is appropriate for the government to halt the process and scrap the bill.

Meanwhile, economists' opinions about the political situation are mixed. 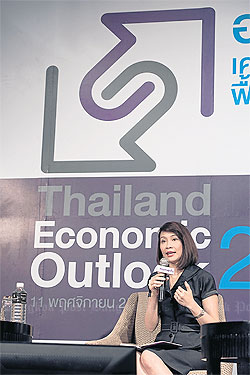 Suphawut Saichua, managing director of Phatra Securities, expects the economy will be affected whether the government decides to continue or dissolve the House.

"Public confidence in the government has been shaken. A House dissolution means we need more time for new general elections and a new cabinet line-up. Therefore, it would also affect

Phatra projects growth of gross domestic production (GDP) to reach 4.5% next year, but that figure may be revised down depending on the key factors of exports and the political situation.

Thailand's exports are expected to rebound next year in line with the US economic recovery. However, the domestic political picture is still unclear.

"The local bourse may be further pressured by negative factors, particularly foreign investors who have not yet reacted to Thai political news because there were more interesting global economy updates," Mr Suphawut said.

Usara Wilaipich, a senior economist at Standard Chartered Bank, agreed that foreign investors are not yet concerned about the political situation but it is because they are familiar with a decade of Thai political uncertainty.

Amid the escalating political tensions, investment applications for Board of Investment privileges, especially, from Japanese investors, have increased strongly for 2012-13. Ms Usara said that would support economic growth.

"For foreign direct investment (FDI), foreigners pay more attention to fundamentals for the long term rather than the short-term economic situation," she said.

The research house forecasts economic growth next year at 4.3-5.5% on a projection of export growth of 9%.

But Sutapa Amornvivat, chief economist at the Economic Intelligence Center of Siam Commercial Bank, believes FDI will be affected by political concerns, given the lower flow of FDI into Thailand compared with neighbouring countries.

Meanwhile, business operators expect to see an impact on tourism as a result of the International Court of Justice's decision to award a disputed area around the Preah Vihear temple to Cambodia.

Niyom Wairatpanij, of the Thai Chamber of Commerce, said the ruling will not affect border trade but will affect tourism as tourists will access the temple through Cambodia instead of Thailand.

The Public Health Ministry will recommend that Covid-19 patients be allowed out after five days of quarantine.

PATTANI: A man was found dead inside a house where he was hiding after exchanging gunshots with police and soldiers in Muang district early on Tuesday, police said.