The older brother of a defendant in the 1990 disappearance and suspected murder of a Saudi businessman on Tuesday said his sibling was a victim of political vengeance in the case that has soured relations between Thailand and Saudi Arabia for two decades.

Gen Somjat Boonthanom, an appointed senator, was speaking before the Criminal Court as a defence witness in the 'blue diamond affair' case, in which his brother, former Police Region 5 commissioner Pol Lt Gen Somkid, is the first defendant.

Diplomatic relations between Thailand and Saudi Arabia have been strained since a Thai caretaker working in the Riyadh palace of Prince Faisal in 1989 stole almost 100kg of jewellery worth US$20m, including a rare blue diamond.

Relations between the two countries worsened in 1990 when three Saudi diplomats assigned to investigate the case were killed in Bangkok. Mohammad al-Ruwaili, a Saudi businessman thought to have had information on the case was allegedly abducted and presumably killed later that year. None of the cases have ever been fully solved. 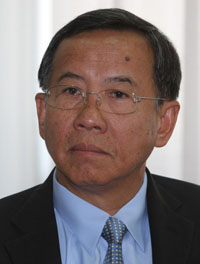 Gen Somjate said politics had interfered with the case because both he, then an election commissioner, and his brother Pol Lt Gen Somkid, played an important role in petitioning the Constitution Court to dissolve the People's Power Party - a previous incarnation of the Pheu Thai Party - on election fraud.

Gen Somjate said Pheu Thai politicians had attempted to take revenge on his brother by reviving the blue diamond case with the goal of either returning the precious gem to Saudi Arabia or putting Pol Lt Gen Somkid behind bars.

He accused Pheu Thai politicians of intervening in the duties of civil servants related to the case and of lobbying a key suspect to give false testimony against his brother.

Pol Lt Gen Somkid was formerly a key suspect in the disappearance of al-Ruwaili. Criminal charges were laid against him but later dropped in 1993 because of a lack of evidence.

However, Pol Lt Gen Somkid was renamed a suspect in the case when the Office of the Attorney-General indicted him and four other active and former police officers in connection with the disappearance of al-Ruwaili on Jan 12, 2010, only one month before the 20-year statute of limitations would expire.

The indictment was the result of an inquiry by the Department of Special Investigation.

Gen Somjate said prosecutors ordered the indictments despite there being no new evidence in the case, adding that the DSI should not have had the authority to investigate the matter.

Earlier this year, the DSI sought to revoke bail for Pol Lt Gen Somkid on the grounds that he had intimidated a key witness who is also suspected of involvement in al-Ruwaili's disappearance.

However, the court said the witness in question had moved to the United Arab Emirates, so it was unlikely the defendant could intimidate him from Thailand.

The court set Dec 27 for the next hearing in the case.