Anti-government protesters take a photo with police officers in front of Government House on Tuesday.

Thavorn Senniam, core member of the People's Democratic Reform Committee (PDRC) and a former Democrat Party MP, announced their "triumph" to the crowd after he negotiated with officers at the MPB headquarters on Sri Ayutthaya Road on Tuesday morning for the removal of barriers and access to the grounds.

The protesters then organised the crowd, telling them which route they should take to enter the MPB, beginning around 10.40am Tuesday, but the crowd seemed uncertain and waited outside for about an hour before actually moving into the grounds.

Earlier, police cut the barbed wire and helped remove it and the concrete barriers to open the way for the protesters.

About 12.50pm, another group of demonstrators were able to enter the Government House grounds peacefully, after police barriers at Orathai and Chamai Maruchet bridges were taken down and they were allowed through.

The peaceful scene on Tuesday was in stark contrast from Monday and overnight, when police fired tear gas, water cannon and rubber bullets as protesters attempted to storm and overturn the barriers.

Protesters and police were on Tuesday relaxed and had smiles on their faces.

Prime Minister Yingluck Shinawatra refused to make any comment to reporters about the protesters' proclamation of victory.

The police Centre for the Administration of Peace and Order (CAPO) held its first conference of the day a short time later.

Spokesman Pol Maj Gen Piya Uthayo said the situation at Government House and the city police headquarters was under control.

In addition to police, the army had deployed three companies of soldiers to Government House to ensure security. 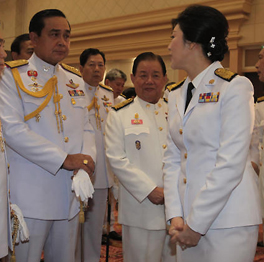 Gen Prayuth, left, and Prime Minister Yingluck meet at the oath-taking ceremony at the Army Club on Tuesday, Dec 3, 2013 . (Photo by Pattanapong Hirunard)

The protesters had not entered any government buildings on Tuesday after being allowed to move into the grounds.

An army officer was also present at the CAPO press conference to affirm the army's involvement.

On Tuesday morning, Gen Prayuth said soldiers will keep the situation under watch from a distance and allow those in the political sector to solve the problems between themselves.

Gen Prayuth and ACM Prajin made their comments after taking part in an oath-taking ceremony for the armed forces at the Army Club on Vibhavadi Rangsit Road.

The mass protests were triggered by the government's amnesty bill, since abandoned by the prime minister's Pheu Thai Party, which opponents said would allow former premier Thaksin Shinawatra to return home from self exile since he fled the countryin 2008 to avoid prison for a corruption conviction, which he contends was  politically motivated. There are also other charges pending against him.

The demonstrators are a mix of royalists, Thaksin opponents, students and supporters of the opposition Democrats, who have not won an election in 20 years.

While the numbers have fallen sharply since an estimated 400,000 people took part in an opposition rally on Nov 24, protesters have besieged and occupied high-profile state targets, including several key ministries. Some observers believe they are attempting to provoke another military coup.

Thailand has seen 18 actual or attempted coups since 1932, most recently with Thaksin's removal in 2006, but the military has appeared reluctant to intervene in the current standoff.