The first night of the funeral of 22-year-old army Private Thanasit Viengkham was crowded but peaceful as military and red-shirt bosses hesitantly sat side-by-side at Yang temple.

Around one hundred mourners from near where Thanasit lived on Sukhumvit Soi 77, his native province Si Sa Ket, Thanarat Military Camp in Prachaup Khiri Khan, where he used to be stationed, and Sai Yok Military Training Camp, where he was attached before his death, attended the prayer service at the Phra Khanong temple on Monday night.

Pictures of the then-unidentified body of Private Thanasit first appeared on Prachatai online after photo-journalist Nick Nostitz captured images of red-shirts carrying him away from Soi Ramkhamhaeng 24-sub Soi 14 in the early hours of Dec 1 - the scene of violent clashes between anti-government students and pro-government red-shirts. 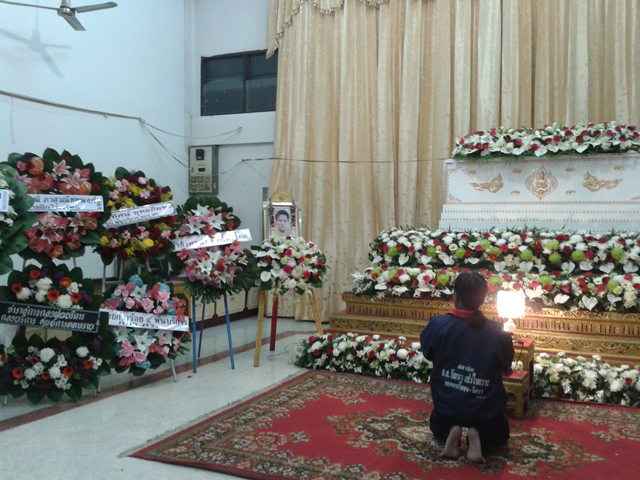 "He was a regular at the red-shirt rallies three years ago. On Saturday night, when there was a call for volunteers to patrol the stadium and guard the tens of thousands of us inside, many young men such as vocational students and ordinary people like Thanasit offered to secure the premises," said Mr Thasit Viengkham, who was one of the government supporters locked inside Rajamangala National Stadium due to the tensions rising outside.

He said one hundred or more red-shirts attempted to protect the stadium, while the sound of gunshots, slingshots and make-shift bombs rang out across the stadium.

"Then somebody held up a blood-stained helmet and told the crowd inside the Hua Mak stadium that our friend had been shot. I didn't know then it was my nephew," said the 42-year-old.

When Mr Thasit's brother, Sanit Viengkham, 46, called him half an hour later to say that Thanasit had died at Phyathai 1 Hospital, he realised the helmet had belonged to a member of his family.

Private Thanasit is survived by his parents, younger sister, two-year-old daughter, who is now in Si Sa Ket, and his wife who worked in Bangkok but is from the same province. 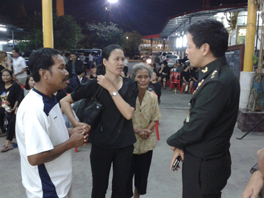 Thanasit's mother Niyom Surawut, 43, said her son had been on leave from Nov 25 till Dec 4. "No one thought his fate would end like this. He still has a young daughter," she said, crying.

Prayer rites will be held until the army private is cremated on Wednesday.

Thanasit's supervisor from his military training school in Kanchanaburi province attended the prayer service on Monday alongside Dr Weng Tochirakarn, core member of the red-shirt United Front for Democracy Against Dictatorship (UDD) and Pheu Thai party-list MP. They did not talk to each other.

After the prayers finished, wreaths from core UDD leaders including former prime minister Thaksin Shinawatra arrived at the pavilion.

A witness of the fatal confrontation near Ramkhamhaeng University told the Bangkok Post that students had been circling the stadium since Saturday evening, but verbal abuse against the red-shirts intensified after sunset, especially at Gate 1 of the sports ground.

At 9.40pm students began throwing slingshot missiles over the stadium's wall and from university buildings, forcing red-shirts to duck behind cars and trees, said the anonymous witness.

But the most violent clashes took place at Gate 5 outside the university campus on Soi Ramkhamhaeng 24.

"The red-shirt fighters were not really guards. Many of them were vocational students. They were angry and wanted to retaliate to the threatening students. Of course, they did fire gunshots and slingshots in exchange with the student fighters," said the witness.

Shortly before midnight 60 unarmed police arrived in a truck but could not get inside sub-soi 4 of the road, the source said. The red-shirts found a middle-aged man from the student's side who they alleged had fired shots at them and turned him to the police.

"Most of the red-shirts were actually trapped inside the stadium because missiles and gunshots were threatening them all night. Many ran out of water and just waited desperately for sunrise," claimed the witness, who said he had to run around to cover himself during the attack.

Shortly before 2am, the first casualties from Ramkhamhaeng sub-soi 4 were carried out. Some red-shirts took to motorcycles to try and chase students back into the campus, the source said.

"It was not the red-shirts who went after the students but it was the other way round. The red-shirts were laid siege to and many were beaten as the students singled out individual members who either wanted to leave or enter the stadium, even that afternoon," he said.

Chavit Suriya, core leader of the Nonthaburi Alliance for Democracy, said tensions escalated after students alleged that red-shirt members slashed a vinyl image of King Ramkhamhaeng, the emblem of the university.

"But our rally was peaceful for more than a week until the university allowed students to stage a protest very near the stadium. Who could actually fire a high-velocity weapon against Viroj Khemnak at Gate 2 after 5am? I'm not so sure if it was the students," said Mr Chavit.