High school students in Ayutthaya wear masks of famous politicians and get together to promote reconciliation. (Photo by Sunthon Pongpao)

Caretaker Prime Minister Yingluck Shinawatra calls on all political parties to sign a ratification for establishing a national reform council after the Feb 2 general election.

Her call was made in a statement broadcast over national television on Saturday.

She said her administration stood firm in its stance that it will continue to protect the constitution and the constitutional monarchy. The government would like Thai people across the country to jointly find solutions to the political crisis under the democratic framework.

"Many ideas have been proposed at national reform forums and the government agrees that it is important for the reforms to cover political, economic and social dimensions," Ms Yingluck said.

"We're ready to cooperate and promote reforms that are truly constructive and beneficial to the people." 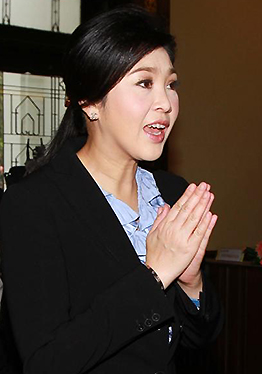 She said the national reform process can proceed in parallel with the general election. The election must take place because the legislative branch represents the people and parliamentary mechanisms are the main driving force to bring about proposals or reforms.

"To make the people confident that after the general election, scheduled for Feb 2, 2014, a new House of Representatives and cabinet will place national reform on the national agenda, I would like to propose these steps.

1) Political parties that field their candidates for the upcoming election together with relevant organisations will sign a ratification stating that after a new House of Representatives and cabinet are formed, a national reform council will be set up immediately.

2) The national reform council will comprise representatives from various professions, legitimate institutions, all political parties and any groups that have important political ideas.

3) The council should serve a two-year term and its main responsibility is to propose reform mechanisms in the long-term, especially political reforms," Ms Yingluck said.

This proposal is only a starting point for different sectors, such as political parties, political groups, academics, businessmen and the general public, she said.

"Over the past eight to nine years, people have lost their trust in Thailand's political system, and their respect for political parties and elections," MrAbhisit said.  "Although there will be an election on Feb 2, people will not have confidence in the new government unless we have political reforms beforehand, so we have decided not to contest it."

PDRC leader Sathit Wongnongtoey, who is a former Democrat MP, said the Democrat Party will not contest in the polls but they will fight alongside the protesters.

Ex-Democrat MP Witthaya Kaewparadai said he wanted people in every province to think of ways to deal with the government if it persisted to have the general election. The problem will not end after the election, he said.

Former Democrat MP Sansern Samalapa posted a message on his Facebook page saying the Democrats were not worried about losing elections.

"In the past elections, we (the Democrats) knew that we would lose but we still contested. But now, we want the party to become an instrument for the people to reform the country," Mr Sansern said.