Prayuth hits out over coup fears

Army chief Prayuth Chan-ocha has asked the media to stop talking about a coup, in an indication the military is unlikely to intervene ahead of rallies tomorrow aiming to shut down Bangkok. 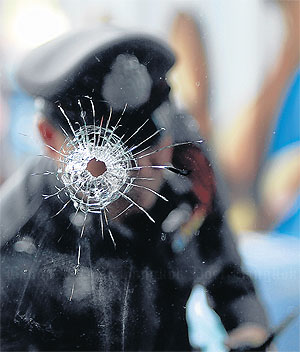 CRIME SCENE: Police near the Khok Wua intersection where a shooting took place.

Speaking after chairing a National Children's Day event at the 2nd Cavalry Division King's guard at Sanam Pao, Gen Prayuth urged the media to stop asking him about the possibility of a coup, saying posing the question every time reporters saw him could only worsen an already stressful situation.

But he admitted he was concerned about possible violent confrontations between rival political groups during the People's Democratic Reform Committee (PDRC)'s occupation of several locations in the capital.

"[A coup] is not a topic that we should be talking about every day," he said.

The media should stop speculating, he said.

"Why do you keep asking me so often? It's like going shopping at market every day."

Gen Prayuth said he was confident the people would find a solution to the political impasse.

"I don't know what that solution is, but we soldiers will do our best to ensure safety for the people," he said.

The army chief had previously remarked that the military does not shut nor open the door to a coup.

The comment intensified rumours about a coup, especially in the lead-up to the PDRC's Bangkok shutdown starting on Monday to demand caretaker Prime Minister Yingluck Shinawatra step down.

The shooting at the anti-government protest site early Saturday morning has also fuelled fears about rising violence that could lead to military intervention.

Col Songwit Nunphakdi, commander of the 11th Infantry Regiment, said the Centre for the Administration of Peace and Order (Capo) had asked the military to help provide security at 37 spots around Bangkok and suburban areas to support the police.

He said some soldiers had been sent to Thai PBS TV station on Friday night. He urged the public not to be alarmed, saying the deployment had nothing to do with a coup.

According to Capo, other places under close watch include television stations 3, 7, 9 and 11 and some key state agencies such as Government House, the Government Complex, the Finance Ministry, the Foreign Ministry, the Interior Ministry, the Office of the Royal Thai Police (RTP) and the MPB. The house of Ms Yingluck is also being closely guarded.

The caretaker government also plans to relocate Capo's headquarters from the RTP office for fear of it being seized by protesters, National Security Council secretary-general Lt Gen Paradorn Pattanatabut said.

The political storm has also worried UN Secretary-General Ban Ki-moon who, at a press conference in New York, said he had spoken to Ms Yingluck and Democrat leader Abhisit Vejjajiva, whose Democrat Party has boycotted the Feb 2 election, in an attempt to " help them bridge their differences".

The first batch of Sinovac Covid-19 vaccines that arrived Thailand on Wednesday has passed the Department of Medical Sciences' quality tests and are ready for delivery to state hospitals, according to Public Health Minister Anutin Charnvirakul.

LOS ANGELES: Lady Gaga has offered half a million dollars for the safe return of her two pet dogs, saying her "heart is sick" after they were stolen at gunpoint in Hollywood.

Who calls the shots?