The Big Story: In case of emergency
Thailand
Politics

The Big Story: In case of emergency

Let's say you are the head of a Thai government, faced with violence and possible insurgency, and you need, really need the single best mind inside the brain of the highly respected person who could be your white knight. Who would you pick? No-brainer, right? 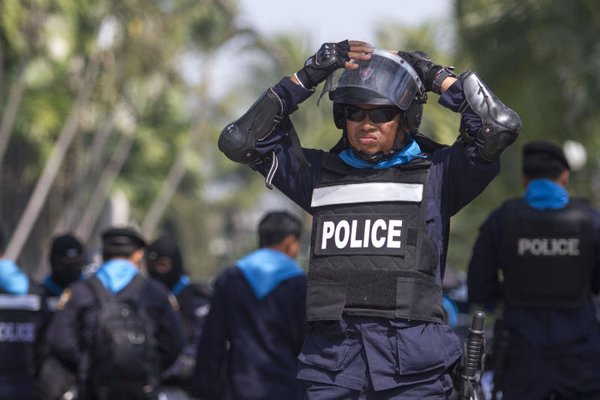 Out came the state of emergency, on went the anti-riot suits. There have been no serious clashes between the mob and the police, but invoking the emergency decree gives the government much more legal backing if it chooses to try to clear the streets.

Just like you, and just as quickly, too, Prime Minister Yingluck Shinawatra, who is the head of the caretaker government, came up with the only possible person to tap for such a huge, difficult job, where a mix of diplomacy and just the right touch of restrained violence is mandatory.

An hour later, Chalerm Yubamrung took command of his very own Centre for Maintaining Peace and Order. He is in charge of enforcing the emergency law decree.

What could go wrong?

Of course, Ms Yingluck did not actually make that choice. She only has to live with the consequences. Mr Chalerm was the first and only candidate proposed by a man in a distant land, who may be out of touch with the details and nuances of what is going on in the homeland he left in 2008. Nothing else seemed to explain the choice.

There was a lot of puzzlement over the move. The government was either winning or not losing with its passive policy. Now, by taking the offensive, it set in place major problems, without a realistic chance of protecting next Sunday's precious election.

The "shutdown" continued to cause some mild inconvenience to some people, while not shutting down Bangkok. The government said that even with the state of emergency, it would refrain from using force against protests - at least "unless they force their way into restricted areas", in Mr Chalerm's words.

In the South, the People's Democratic Reform Committee (PDRC) began a work-at-home project; people who couldn't make it to not shutdown Bangkok were put to the task of not shutting down their home towns - which were already in favour of a shutdown anyhow.

Mr Chalerm's first act as Emergency Enforcer was to order dozens and dozens of police in Darth Vader anti-riot suits to protect the lobby and stairwell to his inner sanctum at the Ministry of Public Health. His first statement was, "I hope Suthep will change his mind and surrender to police."

There were two equal chances that Suthep "Kamnan Thep" Thaugsuban would do that: fat and slim. When he didn't, Mr Chalerm found a new headquarters at the Bureau of Narcotics.

Not that the state of emergency achieved nothing. It is just that, to reverse the song lyrics, it accentuates the negative and eliminates the positive.

Within a day, Ms Yingluck was forced to flee the "impregnable" defence ministry headquarters when the mob approached. Within two days, automatic rifle fire gunned down the most high-profile red shirt in the Northeast, Kwanchai Praipana. Within three days, the Constitution Court assembled to authorise what the mob wanted all along, which is the cancellation of the election - when the main purpose of the state of emergency was to ensure voting will be held.

The state of emergency, officially invoked on Wednesday, covers Bangkok and three urban provinces to the north and south of the city proper. But only parts of the decree have been put into play, most notably Article 11, allowing mass arrests without warrant, and detention for up to seven days.

Article 9, which allows authorities to "disperse demonstrations" a la 2010, is not (yet) in effect. The head of the National Security Council, Lt Gen Paradorn Pattanatabut, said there would be no censorship - for now - and then "invited" some TV executives for discussions about how they could fine-tune their news coverage.

As usual, Ms Yingluck and cabinet were far too busy to go into details to justify their actions. That was left pretty much to Foreign Ministry permanent secretary Sihasak Phuanggetkeow, who called in the diplomatic corps to clarify that the government only wants to ensure it can hold next Sunday's elections - which actually begin with nationwide advance voting today. He went on, "In no way will there be the use of force, and utmost restraint will be the order of the day." (Continued after the photo) 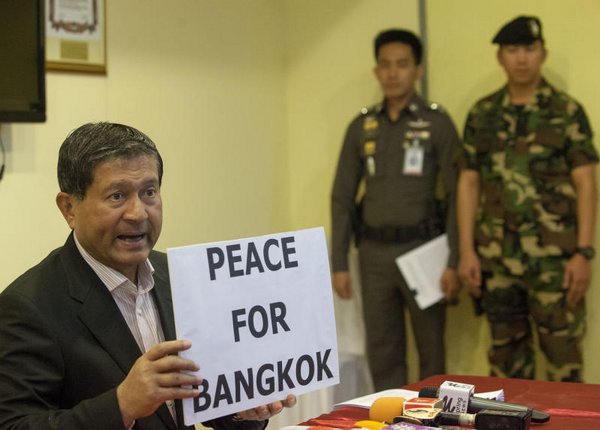 As always, Chalerm Yubamrung brings unique performance to politics, and with him at the helm of the office to enforce the state of emergency, the only thing certain is uncertainty. (Photo by Pattarapong Chatpattarasill)

Twenty hours later, the government ordered a ban on groups of more than five people "deemed to be trying to incite unrest". So check back soon to see if Mr Sihasak was expansive or economical with the truth about government intentions.

From that action, this reaction. "The People's Democratic Reform Committee will continue to protest until we succeed in reaching our goals," said committee spokesman Akanat Promphan, the son of Mr Suthep's wife.

Mr Suthep himself adopted Churchillianism. "We will defy them all. We will march on every road they have banned. We will use loudspeakers even if they prohibit us. We will do everything they forbid us to do."

(And credit where credit's due. Mr Suthep was also unrhetorical for a short moment of wise instructions. "Don't be scared," he told followers and TV watchers. "If they come to disperse us, we will sit down and pray. If they storm in, we will retreat orderly without any panic.")

Democrat Party spokesman Chavanond Intarakomalyasut showed he has regained the sense of humour he lost in 2010. He "demands" the emergency decree be revoked immediately because it will damage tourism and dampen foreign confidence. The last state of emergency apparently didn't do that.

Pheu Thai Party spokesman Prompong Nopparit suggested that instead of commanding a coup, army chief Prayuth Chan-ocha use his good offices to mediate political peace talks, right after next Sunday's election. "I believe Mr Suthep will listen to the military."

By invoking the state of emergency, the government has broken the law. No, not that law - a key law of science.

Isaac Newton's third law of motion states simply that for every action there is an equal and opposite reaction. But the emergency decree was not equal to the mob's actions. It was a massive new action, an escalation of the confrontation between government and the marching mobsters.

In times past, most recently in 2010, the mob has reacted to restore Newton's precious balance, using murderous and destructive force to equalise the government's murderous and destructive force. For sure, no two situations are alike, but Ms Yingluck, Big Brother and company should consider that since 1973, no government or junta has prevailed for long when it resorted to guns and armour against a mob.