The National Anti-Corruption Commission (NACC) will launch an impeachment probe against caretaker Prime Minister Yingluck Shinawatra on Tuesday, piling the pressure on her administration. 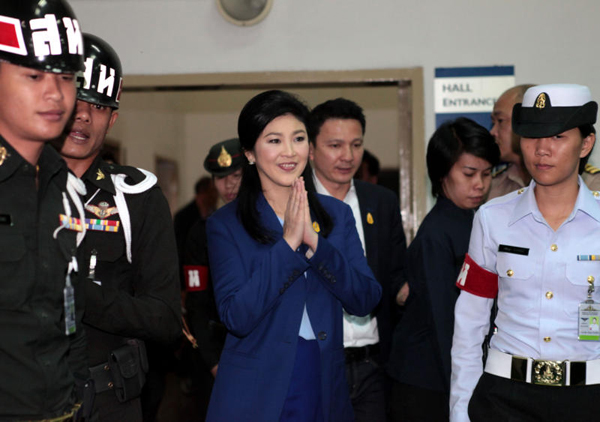 As caretaker Prime Minister Yingluck Shinawatra meets the Election Commission on Tuesday, the anti-graft agency will launch an impeachment probe against her. (Photo by Chanat Katanyu)

The move comes ahead of Sunday's snap election which the government has vowed to press ahead with despite a Constitution Court ruling saying that it can be postponed.

Ms Yingluck and key caretaker cabinet members will meet the Election Commission (EC) on Tuesday to discuss the possibility of delaying the election.

The EC was reportedly prepared to propose in the discussion that the caretaker prime minister issue a royal decree to reschedule the election date.

However, several key figures in the caretaker government have reiterated their official position that the election must proceed.

The NACC has scheduled a meeting on Tuesday to initiate impeachment proceedings against Ms Yingluck for alleged negligence of duty in the rice-pledging scheme, a process that could be concluded in a month.

According to NACC member Vicha Mahakhun, the NACC board will fast-track the launch of the impeachment probe against Ms Yingluck, who chaired the National Rice Policy Committee.

The process would bypass the investigation process of an NACC sub-panel which was earlier supposed to be set up and take one or two months to investigate before submitting its findings to the NACC's nine commissioners.

But the commissioners are expected to take up the case for consideration by themselves.

Mr Vicha said the process would take much less time than the original plan because it is not a criminal investigation.

The initial ouster bid was submitted to the NACC via Senate Speaker Nikhom Wairatpanich by then opposition leader Abhisit Vejjajiva as part of the opposition's no-confidence against Ms Yingluck in November.

The anti-corruption law allows the NACC board to undertake the impeachment process if the case is of significance.

According to Mr Vicha, the impeachment investigation will make the NACC's inquiry, which was set up earlier into Ms Yingluck's role, "unnecessary".

On Jan 16, the NACC agreed to launch an inquiry into the role of Ms Yingluck when a probe panel decided to bring formal corruption charges against 15 people involved in government-to-government rice deals, including former commerce minister Boonsong Teriyapirom and former deputy commerce minister Poom Sarapol.

The Civil Court will issue a ruling later this week on whether to nullify the state of emergency and prohibit the use of force to disperse anti-government protesters who are determined to oppose Sunday's general election.

The NACC's move coincides with a meeting on Tuesday between Ms Yingluck and the EC at the Army Club on Vibhavadi Rangsit Road.

EC member Somchai Srisuthiyakorn said the agency will ask the government to issue a decree cancelling the polls.

If the government agrees, a decree can be drafted within half an hour.

Mr Somchai said he thinks the polls should be delayed for 120 to 150 days, with four months considered to be the most appropriate timeframe.

According to Mr Somchai, it is not good for a government to stay on in an administrative capacity for too long because it has limited authority, which could end up hampering national administration and development.

"A postponement is likely to help solve the problems. The political chaos would not spiral out of control," he said.

However, a senior government source told the Bangkok Post that the government is likely to insist that Sunday's elections go ahead as scheduled.

The planned election cannot be postponed unless there is a court order nullifying the general election as was the case in 2006, it believes.

"The Constitution Court was not clear on this issue," the source said, adding that there were fears within the government that if it proceeds along these lines it would fall into a "legal trap".

The government has consulted with the Council of State and the conclusion is that there is no legal loophole for the government to proceed and postpone the poll.

Its recommendation to the government is that it proceeds with the election and if there is a petition to the Constitution Court to nullify the poll then a new date can be set.

The caretaker government has remained defiant over the election proceeding despite disruptions to the advance voting last Sunday.

Mr Surapong said it depends on the EC whether the main vote will take place. He also criticised the Constitution Court for not making it clear what the government should do.

He said the court's decision on the poll deferment is not a "ruling" but a recommendation.

According to Mr Surapong, the election should not be postponed because in the advance voting it was clear that in 66 provinces it proceeded without disruption.