The Centre for Maintaining Peace and Order (CMPO) will station extra police officers at Bangkok polling booths for Sunday to provide safety for voters as more signs emerge of increased problems. 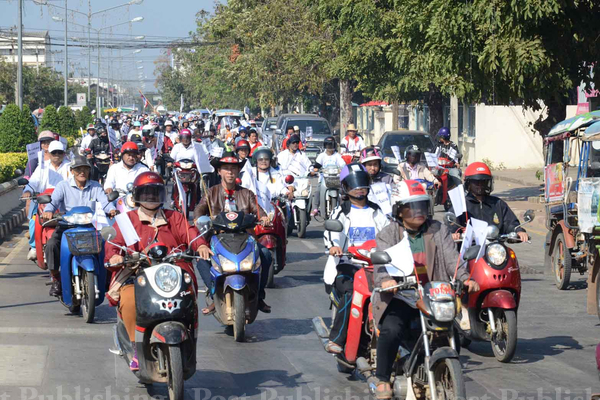 Residents in Kalasin province campaign on Wednesday for the Feb 2 election. (Photo by Yongyuth Phuphuanphet)

The centre agreed on Wednesday to a request made by the Bangkok Metropolitan Administration (BMA) after outbreaks of violence on advance voting day on Sunday were capped by a protester leader being shot dead.

CMPO director Chalerm Yubamrung said 10,000 police were being deployed. He called on the general public to exercise their right to vote with police on hand to ensure safety and smooth election proceedings, starting by the supervision of the delivery of ballot boxes.

Bangkok and the southern region were hit by protests and blockades. Voting did not take place in 47 constituencies in the South. An election banner of a Bhumjaithai Party candidate at a bus stop on Din Daeng Road in Bangkok is damaged as it prevents commuters from seeing incoming buses. (Photo by Nattapol Lovakul)

Problems in Bangkok continued on Wednesday when election chiefs assigned to two district stations resigned, Veera Yeephrae, the EC chief in Bangkok, said. One was to oversee the poll at a station in Bang Kapi district and the other was at Yannawa and Bang Kholaem districts.

BMA governor MR Sukhumbhand Paritbatra showed sympathy for them, saying the two officials, who work for City Hall, had the right to quit over safety concerns considering what happened on advance voting day.

EC commissioner Somchai Srisuthiyakorn said the polling agency had set Feb 23 as a new date for advance voting in areas that were affected by protesters.

The PDRC is trying to prevent the election, saying reform should be undertaken first before the country organises a new poll.

The election will be contested by 53 political parties, including Pheu Thai.

The caretaker government and Pheu Thai have been trying to drum up support for the election in Bangkok and other provinces.

Caretaker Interior Minister Jarupong Ruangsuwan ordered all provincial governors to carry out a campaign to promote the election and encourage voters to go to the polls.

"Opponents of the election are looking down on people,'' Mr Jarupong said.

Pokin Polakun, a key legal expert for Pheu Thai, stressed the need to hold the election as it was stated in a royal decree and urged the EC to use all measures to ensure that the poll is carried out on Sunday.