As stress builds, more attacks on protesters are expected and security is paramount / A lot has changed for Suthep Thaugsuban, not least his image / The race is on to replace police chief Adul Saengsingkaew when he retires

The People's Democratic Reform Committee core leaders are on red alert after almost routine attacks, some of them fatal, at recent protests. 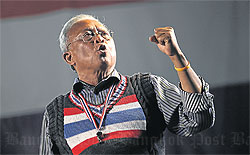 PDRC leader Suthep Thaugsuban gesticulates on stage. He refuses to wear a bullet-proof vest despite urging from security guards.

More security guards have been recruited to provide protection for the protest leaders, most notably for the PDRC secretary-general Suthep Thaugsuban.

Mr Suthep is driven around in a vehicle surrounded by a convoy of motorcycles made up of plainclothes police and soldiers. The convoy includes four to six security vehicles.

Other protest leaders are each accompanied by up to six personal guards when they are outside the rally sites. The leaders' vehicles are also changed often and they do not use the same roads getting to the protest sites.

And regular protest speakers are provided with security escorts from their homes to the protest venues and back.

Sandbags are piled up to form buffers lining almost the entire width of roads leading to the rally stages. This is to prevent attacks on the protesters from people in vehicles driven into rally venues.

Security cordons set up by protest organisers are especially tight at the main Pathumwan intersection site, which is also near the Sra Pathum Palace in the centre of the capital.

As for meals, the protest leaders eat only food prepared by Krua Suthep, formally known as Krua Ratchadamnoen, a kitchen responsible for feeding protesters and co-leaders at various rally venues.

Protesters have been advised not to accept food given by strangers at rallies. The leaders themselves are extra cautious to prevent the possibility of "deliberate" food poisoning.

Early this week, Mr Suthep slipped on a jumper knitted by a veteran journalist. He told the protesters at the Pathumwan intersection that he planned to auction off the jumper to raise funds for Krua Ratchadamnoen.

At the end of the auction, the woollen pullover  bearing the colours of the national flag  went to the highest bidder who offered a whopping 200,000 baht.

To optimise security, the leaders have been sent bullet-proof vests.

Mr Suthep, however, has declined to wear one, despite prompting from security guards. Other other leaders have followed suit and appear vest-free on stage.

The vests were instead distributed to the security guards, including those standing by the Lat Phrao rally venue which has come under armed attack. Piles of vests are a common sight at the venue.

The Lat Phrao site is vulnerable to attacks and was hit by a grenade early Wednesday morning, wounding two people.

The grenade, believed to have been fired from a spot on a nearby road, damaged the side of a ventilation shaft near the main entrance to Chatuchak subway station.

Two demonstrators who were staying overnight at the site were slightly injured.

The leaders do not wish to create the impression that they cringe in fear from danger, which would only demoralise the protesters as political tension escalates in the lead-up to the election tomorrow.

The MP who shed his cloak

Protest leader Suthep Thaugsuban has gone from zero to hero in just a few weeks after he launched the street protest against the amnesty bill in late October.

The ex-Democrat MP for Surat Thani did not see it coming when he started the anti-government movement.

One reason why is that Bangkok is not his political turf. There was also the fact that he had something of an image problem, especially among city residents.

Many Bangkok voters have questioned his role in a land reform scandal involving the issuance of Sor Por Kor 4-01 land documents in 1994 when he was a deputy agriculture minister in the Democrat-led administration.

The land scandal eventually forced then prime minister Chuan Leekpai to dissolve the House in 1995.

"People in Bangkok hated me. When the Sor Por Kor scandal emerged, no one bothered to say hello to me. It was miserable. They just didn't listen to what I had to say," Mr Suthep said.

The street protest against the controversial amnesty bill  thought to be designed to whitewash deposed premier Thaksin Shinawatra  gave birth to a popular campaign to root out the so-called Thaksin regime and has stirred hundred of thousands of people to join the movement.

There are spontaneous cheers and whistle-blowing from thousands of city residents who gather in the streets to greet Mr Suthep as he goes on his many marches in various parts of the city.

The crowds push and shove to catch a glimpse of him and have their pictures taken with him.

Mr Suthep said he thought many city folk had put the past behind them and have jumped on the anti-government bandwagon.

The veteran politician, who is widely known among the anti-government protesters as Kamnan Suthep, believes the campaign has come this far because people have had enough of the government and that he has the guts to take it "all the way".

The support has translated into all kinds of donations  cash, food, medicine  for the protesters.

But the street protests are costly and with seven rally sites to run, the expenses are seven times more. Much of the expense is funded by public donations.

Food items and amulets top the list of donations for Mr Suthep and he says he cannot turn down the hospitality.

There are all kinds of food supplements to keep him strong and healthy, he said. There are also amulets to give him divine protection in the face of sometimes threatening security situations.

With warrants out for his arrest on a treason charge, Mr Suthep has had several close calls with the authorities who are looking for him. Sometimes he sleeps among the crowds for safety.

When the street protest was in its early stage, Mr Suthep was under tremendous pressure. "What is next?". "How and when is everything going to blow over?" These are questions he hears after calling people together for every rally.

But after Mr Suthep went ahead with the "Bangkok shutdown', the questions have been replaced with words of encouragement for him to see it through.

Jockeying to be the top cop 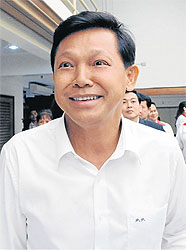 Three names will likely be dropped in the hat as contenders for the next police chief.

The three-horse race will involve the luminaries of the Royal Thai Police Office who who have shone the brightest in recent times: Pongsapat Pongcharoen, Worapong Chiwpreecha and Ake Angsananond.

All of them are deputy police chiefs holding the rank of police general. And that is just about the only thing they have in common.

As national police chief Adul Saengsingkaew is due for mandatory retirement at the end of the fiscal year in September. The rumour mill is buzzing about who will fill his shoes.

All eyes are on the three police generals. Ranked in order of likelihood of succeeding Pol Gen Adul are Pol Gen Pongsapat, Pol Gen Worapong and Pol Gen Ake, a police source said.

Pol Gen Pongsapat is the darling of Pheu Thai and well-trusted by Thaksin's inner circle.

The profound trust is shown in Pol Gen Pongsapat being able to concurrently assume the posts of deputy police chief and secretary-general of the Narcotics Control Board.

But if Pol Gen Pongsapat eventually takes over from Pol Gen Adul, he will be the only top commander who has never had a background in supervising police stations or heading the main bureaus or divisions.

Although Pol Gen Pongsapat can count on rock-solid political backing to propel him to the pinnacle of his career, Pol Gen Worapong's chances cannot be dismissed.

He has been designated important supervisory tasks in handling and countering the anti-government protests. This duty has lifted his profile to outshine the other deputy police chiefs.

Pol Gen Ek, on the other hand, provides quite a contrast to Pol Gen Pongsapat as far as history is concerned. Despite being the only incumbent deputy police chief who is a non-graduate of the Police Academy, he has a few aces up his sleeve which could give him an edge over both Pol Gen Pongsapat and Pol Gen Worapong.

Compared to Pol Gen Pongsapat, Pol Gen Ek is noted for his exceptional coordination skills within the police force.

He was roped in during his time under many previous national police chiefs to coordinate between headquarters in Bangkok and police stations in the provinces for high-level policy execution.

Pol Gen Ek enriched his experience working on the ground as a young police officer under the regional bureau in Hat Yai district of Songkhla. He and Pol Gen Pongsapat may not have got along so well during their rise through their ranks.

Pol Gen Pongsapat was named police commander before Pol Gen Ek, who in turn was elevated to a police commissioner, which landed him first in the ranks of police lieutenant generals.

They later were tied when both were promoted to the senior position of police force adviser and made police generals and subsequently deputy police chiefs in the same reshuffle.

The stakes are extremely high. The one who misses out as police chief at the end of September looks certain to spend the remainder of his days in the police force as the other's deputy.