The Pheu Thai Party is poised to dominate the House of Representatives with at least 300 MPs following Sunday's general election, but has warned supporters not to start victory celebrations polls just yet. 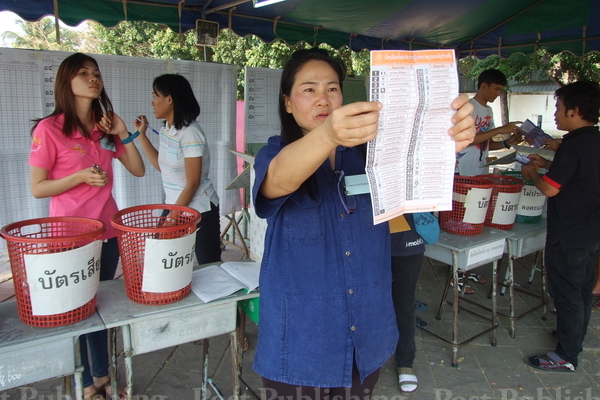 Election officials count ballot sheets at a polling unit in Buri Ram province on Sunday. The Pheu Thai Party is expecting another landslide win in the general election. (Photo by Pikul Kaewhawong)

Sompong Amornwiwat, who directed the party's election campaign, on Monday projected that at least 300 Pheu Thai candidates would win seats in Sunday's poll. It expects to take 240 of 375 constituencies and no less than 60 party-list seats.

The projection would mean the party has a bigger majority in parliament than it won at the 2011 election, when it took a total of 265 seats, riding on the popularity of Yingluck Shinawatra who made her political debut as a prime ministerial candidate.

But Mr Sompong reminded party supporters that celebrations should be put on hold since the election is marred by legal disputes. Anti-government protesters with the People's Democratic Reform Committee (PDRC) want the polls nullified on the grounds that voting could not be held in one day.

The Democrat Party also believes that the vote breached Electoral Act and the constitution and has asked that the Constitution Court rule on the validity of the polls.

Mr Sompong added that all Pheu Thai candidates have been directed not to hold victory parades in their home constituencies to thank voters for choosing them until the election process is finished.

Sunday's general election was completely cancelled in nine provinces - all in the southern region - after PDRC supporters blocked the delivery of ballot boxes and papers to polling stations. A number of polling units were unable to open in a further nine provinces due to protests. The Election Commission (EC) will organise another round of voting for those areas affected by disruptions.

The Election Commission (EC) has also organised a second round of voting for people who were unable to cast ballots when protesters blocked advance voting on Jan 26. The second-chance vote for those people will take place on Feb 23.

The Democrat Party chose to boycott Sunday's snap general election, called when caretaker premier Yingluck dissolved parliament in a bid to appease anti-government protesters, so Pheu Thai dominated the list of candidates available to voters, alongside small and medium-sized parties.

Noppadon Pattama, a Pheu Thai strategist was cautious about predicting the popularity of the party in the polls, arguing that speculation should be put to one side, pending official results from the Election Commission.

Pheu Thai legal experts and party leader Charupong Ruangsuwa have said they are confident that the poll was held in line with the constitution.

Kanin Boonsuwan, a Pheu Thai party-list candidate, argued that the election process was only incomplete because of the PDRC's unconstitutional attempts to derail the polls and obstruct voting.

Ballot sheets were counted across the country on Sunday but the results will not be announced until all votes from second-chance voting rounds are included.

The unofficial turnout of eligible, registered voters in areas where ballots were cast was 45.8%, according to EC secretary-general Puchong Nutrawong.

The poll was smoothly across all northern and northeastern provinces, which are largely Pheu Thai strongholds.

The prime minister calls for Japanese support in making Thailand the world's major electric vehicle production hub, at the Nikkei Forum in Tokyo.