The red shirts on Sunday renewed their opposition to attempts to bring in an outsider as prime minister. 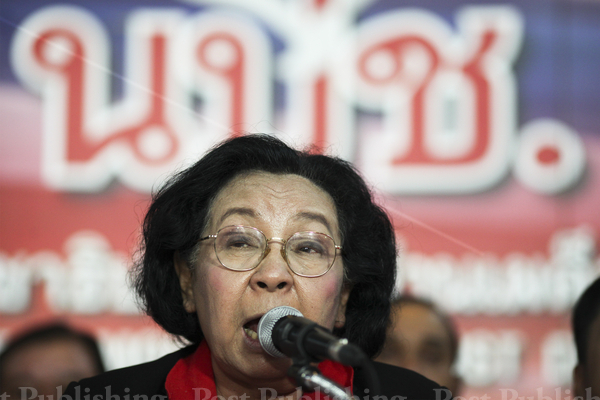 United Front for Democracy against Dictatorship (UDD) leader Tida Tawornseth insisted on an elected MP governing the country and said moves to push for a prime minister from outside parliament are against the constitution.

''No outsiders can be prime minister. Both the 1997 and 2007 constitutions make clear that a prime minister must be a member of parliament,'' she said.

Former deputy prime minister and finance minister MR Pridiyathorn Devakula was the latest prominent figure to join the anti-government chorus. The former Bank of Thailand governor on Thursday urged Ms Yingluck to resign to show responsibility for the failure of the rice subsidies programme.

MR Pridiyathorn said resignation was possible under the democratic process and that a new government would move the country forward.

Mrs Tida said fighting to block an unelected person as prime minister is the ultimate course for the UDD and urged the Election Commission to hasten the completion of the election by organising poll reruns in constituencies unable to vote on Feb 2 and advance voting on Jan 26.