Sonthiyan ordered to be released, CMPO to fight back
Thailand
Politics

Sonthiyan ordered to be released, CMPO to fight back

Sonthiyan Chuenruthainaitham was ordered to be released on Monday after the Criminal Court on Thursday rejected a police request to further detain the People's Democratic Reform Committee core member.

Mr Sonthiyan was arrested on Monday while eating at Central Department Store Lat Phrao. He is one of 19 PDRC leaders wanted under arrest warrants for violating the emergency decree in their Bangkok shutdown campaign.

The court ruled that police had plenty of time to question Mr Sonthiyan, who had cooperated well with the authorities over the past four days. There was no reason to detain him beyond the initial seven days, the court said.

Mr Sonthiyan thanked police at the Region 1 Border Patrol Police headquarters in Pathum Thani's Khlong Luang district for taking good care of him during his detention.

''He dressed in an casual outfit and looked relaxed today,'' said a reporter of T-News, the agency of which he once was an executive.

The court's order is a blow to the Centre for Maintaining Peace and Order (CMPO), which tried to convince the court through the police that his release could see him return to the rally.

Mr Sonthiyan was accused by the CMPO of being a key man who linked the ''financial pipeline'' of supporters to PDRC leaders.

After the court's order, the CMPO disclosed a new move to keep him in detention with the serious charge of treason.

CMPO member and chief of the Department of Special Investigation (DSI) Tarit Pengdith said the DSI, state prosecutors and the National Police Office will ask the court on Sunday to detain him on the new charge for 12 days.

''That the (criminal) court rejected a request to prolong the detention of Mr Sonthiyan does not mean he will be released because he is still facing other charges,'' Mr Tarit said in a CMPO press conference.

In this first interview after his detention with Spring News on Wednesday, the PDRC leader said that the detention will not deter him from campaigning to end Thaksin Shinawatra's influence.

''I will fight with my life until the Thaksin regime is wiped out of the country. I decided to fight completely, so we'll wait for victory,'' he said in an hand-written statement released by Spring News.

Mr Sonthiyan said he spent two hours at the department store on that day waiting for a subordinate to bring cheques for him to sign before the arrest.

The day before he was captured, he said, he moved from a ''safe house'' in Lat Phrao area to stay at a hotel after being alerted that about 200 police planned to storm the place. He had only a driver without bodyguards, he added.

Mr Sonthiyan said on Thursday he would take legal action against police who searched his house in Nakhon Pathom.

The search caused an uproar as a group of uniform and plainclothes police from Pho Kaew station with a search warrant from the Nakhon Pathom court stormed his house at Puttha Thani estate in Sam Phran district at 6.24am on Tuesday. They were seen climbing over the fence into the compound. Only his wife, daughter - Kingkaraked - and two male caretakers were inside at the time.

Footage of the security camera installed outside the place captured the officers raiding the house. But Mr Tarit said it was doctored and defended the police for doing their duty properly.

Mrs Kingkaraked said after the search that she was never informed about their coming and was upset about the way the officers raided the house.

Senator Rosana Tositrakul, who visited the house hours later and watched the footage, criticised police on her Facebook page on Wednesday.

She quoted Pol Lt Col Prasom Hongto of Pho Kaew as telling her on Tuesday that the police rang the bell. After nobody answered, they decided to storm the place, he added.

But Ms Rosana said the footage clearly showed there was no attempt to call the people in the house and showed the opposite. 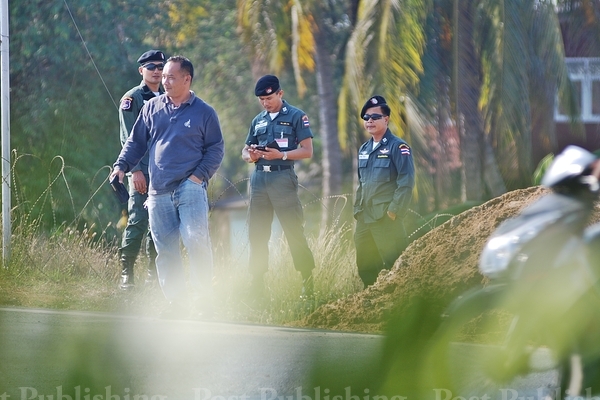 The Region 1 Border Patrol Police headquarters is under tight security after the dentention of anti-government co-leader Sonthiyan Chuenruthainaitham. (Photo by Pongpat Wongyala)