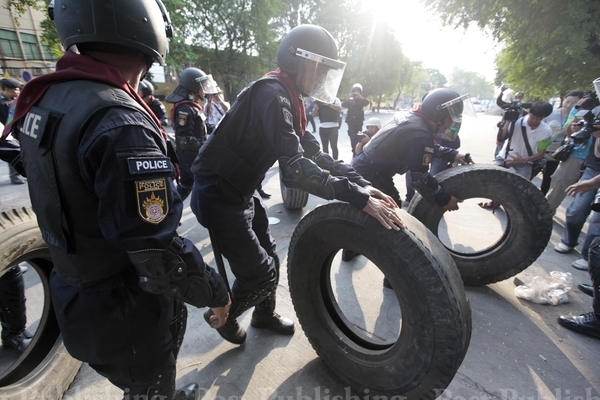 Police remove barriers put up by protesters after taking control of Makkhawan Bridge on Friday. (Photo by Thiti Wannamontha)

Director of the Centre for Maintaining Peace and Order (CMPO) Chalerm Yubamrung and National Security Council (NSC) chief Lt Gen Paradorn Pattanatabut were satisfied with the operation on Friday morning after riot police peacefully took control of the bridge and surrounding areas on Ratchadamnoen Nok Avenue.

Independent protest groups abandoned its campsite in the area and allowed officers to move in with almost no resistance.

Mr Chalerm said the centre would next attempt to clear rally stages near Government House, the Interior Ministry and the Chaeng Watthana government complex. 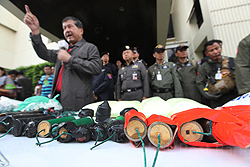 The protest site near Government House is controlled by the Network of Students and People for Reform of Thailand, while the camp at the Interior Ministry is overseen by Somsak Kosaisuk, a People's Democratic Reform Committee (PDRC) leader.

The stage near the government complex on Chaeng Watthana Road is managed by PDRC protest monk Luang Pu Buddha Issara.

But protest leaders dismissed his allegations, arguing that the items did not belong to demonstrators.

Police gathered at Laksi at around 8am this morning before moving in on the Chaeng Watthana rally stage. But they withdrew before noon after a stand-off with protesters led by Luang Pu Buddha Issara.

''Another attempt to reclaim the area near the government complex will begin tomorrow. Today is Makha Bucha Day so we should show Phra Buddha Issara some respect,'' the CMPO chief said.

Pol Lt Gen Nares Nanthachote, chief of Provincial Police Region 1, who is responsible for the mission to reclaim Chaeng Watthana, said more officers will be deployed in a second bid to clear the rally site led by the monk.

Around 1,000 police were dispatched on Friday to counter the protesters at the site. Pol Lt Gen Nares said 500 more officers will be used on Saturday if negotiations to convince the monk to abandon the rally site collapse.

Luang Pu Buddha Issara shrugged off the warning and vowed to protect his rally site by bringing more supporters to the camp. Reinforcements will come from provinces outside the city and not from other rally stages in the capital, he added.

He called on his followers to use cars and other vehicles to block the road from a possible raid by police.

Mr Somsak also vowed to keep the Interior Ministry under PDRC control despite police threats, saying that officials were only targeting the rally site because it is the office of caretaker Interior Minister and Pheu Thai Party leader Charupong Ruangsuwan.

The site at the ministry has also been reinforced with demonstrators after the protest leader called on people from other stages to relocate to the area.

PDRC co-leader Sathit Wongnontoey told supporters at the Pathumwan rally stage that he expected challenges from the CMPO and police throughout the weekend, as the caretaker government struggles to reclaim parts of the city, one month after the PDRC launched the Bangkok Shutdown campaign on Jan 13.

He called for patience from anti-government protesters taking part in the PDRC's "political uprising" and said victory was on the horizon if they could withstand the CMPO's latest efforts to derail their cause.